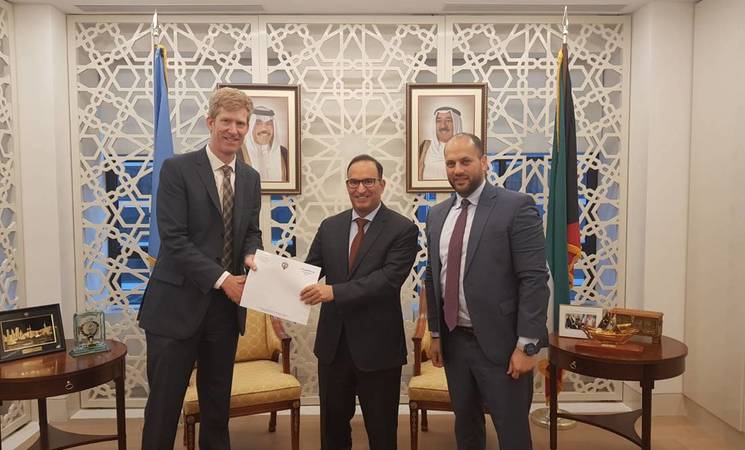 The Government of Kuwait has contributed US$ 5 million to the United Nations Relief and Works Agency for Palestine Refugees in the Near East (UNRWA). The event was marked by Permanent Representative of Kuwait to the UN, Ambassador Mansour Al-Otaibi presenting UNRWA Representative in New York, Mr. James Dykstra with the donation in New York on Thursday.

This generous contribution to the Agency will fund its Syria operations and improve living conditions for some 560,000 thousand Palestine refugees in Syria, who continue to endure harsh conditions after eight years of armed conflict.

Kuwaiti Ambassador, His Excellency Mansour Al-Otaibi said: “We are very pleased to announce that the Government of Kuwait has decided to contribute US$ 5 million to Palestine refugees in Syria. UNRWA is a very important and effective international organization that provides assistance and humanitarian protection to five million registered Palestinian refugees in the region. The daily services of this Agency are a life line and are unique.”

Mr. Marc Lassouaoui, Chief of the UNRWA Donor Relations Division expressed his sincere gratitude and recognition of the continuous support that Kuwait has extended to UNRWA over the years: “We are extremely grateful for the generous partnership provided by the Government of Kuwait to Palestine refugees in Syria. We are proud of the strength of the country’s commitment to our Agency. UNRWA is currently enduring a critical financial and political period. Now is the time that we ask all our partners and our supporters to step up for Palestine refugees.”

“Kuwait has long been an important and consistent donor to UNRWA. Since 2013, their contributions to the Agency have totaled US$ 135 million, including US$ 65 million for the Agency's operations in Syria. This support from the Kuwaiti government, as well as Kuwait-based organizations, such as the International Islamic Charity Organization, the Kuwait Fund for Arab Economic Development and the Kuwait Red Crescent, enables UNRWA to continue to provide essential services to some 5.4 million Palestine refugees across the Middle East”.