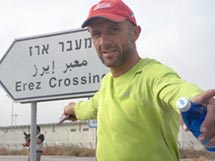 Marathon runners appear to have become the latest item on the list of things banned from the Gaza Strip. Max Calderan, an Italian national and winner of four international marathons, had hoped to run through Gaza as part of his 540 kilometre “Run For Love” from Ramallah, to Jerusalem, through Gaza, into Egypt and then to the pinnacle of Mount Sinai. Having been told by the Israeli authorities initially that he could go into Gaza as part of this five day mega-marathon and having been given assurances from the Israeli Ministry of Sport, he was still barred.

“I am very disappointed because there is no politics, no religion, nothing controversial in my Run For Love”, Max told a news conference in Jerusalem. “I run simply in the name of peace”. When asked whether he was a security risk because of potential problems in Gaza, Max said his “security was guaranteed by the United Nations and that this was just an excuse by the Israeli authorities to keep him out of Gaza”.

The event was co-sponsored in Gaza by the United Nations Relief and Works Agency. UNRWA Spokesperson, Christopher Gunness said: “It seems that marathon runners have now joined that list of banned items. Light bulbs, detergent, building materials and now marathon men. To make matters worse”, said Gunness, “we had young athletes, disabled children waiting to run with Max inside Gaza. They have been deprived of some sportive fun. Parents everywhere will surely find this a bewildering decision.”

Max Calderan will now travel from Jerusalem to Egypt by car where he will resume his run, a further 250 kilometres to the top of Mount Sinai. 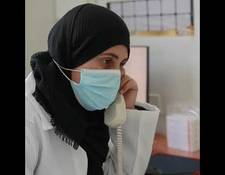