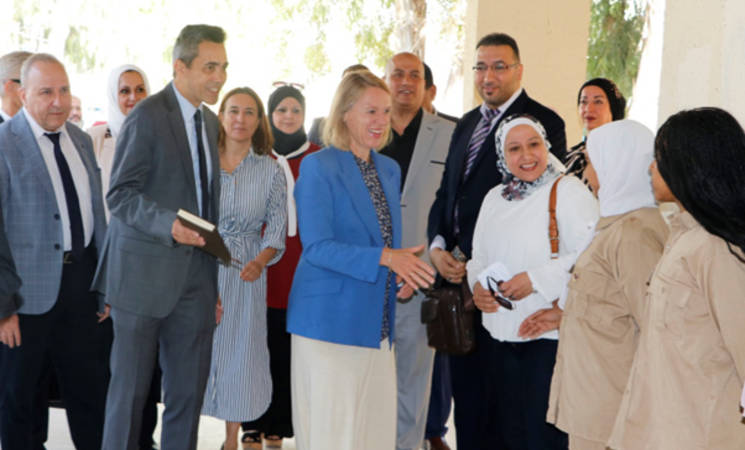 The Minister of Foreign Affairs of the Kingdom of Norway, Her Excellency Ms. Anniken Huitfeldt, on Monday paid a visit to a Palestine refugee camp in Jordan with United Nations Relief and Works Agency for Palestine Refugees in the Near East (UNRWA) officials. The Foreign Minister and accompanying delegation, including Norway’s Ambassador to Jordan, H.E. Mr. Espen Lindbæck, was welcomed to Baqa’a Camp by UNRWA Chief of Staff, Mr. Ben Majekodunmi, Director of UNRWA Affairs in Jordan, Ms. Marta Lorenzo and by the Director-General of the Department of Palestinian Affairs, Engineer Rafiq Khirfan.

The delegation met first with members of the UNRWA students parliament for an interactive dialogue on issues related to transforming education. Students responded to questions on their roles and presented several demands for both the Agency’s management and donors, represented today by Norway, hoping that such demands on improving their schools and the learning environment will be realized.

The delegation was briefed by frontline staff on the Agency’s efforts to align its response with national action plans to mainstream mental health and psychosocial support in schools and primary health care. Frontline staff reported that 20 per cent of patients in the UNRWA health clinics have been experiencing mental health issues and that this trend has been on increase after COVID-19. The Mental Health and Psychosocial Support Programme (MHPSS) has been integrated into the Agency’s health system at all 25 health centres in Jordan. All staff, from doctors to pharmacists and clerks, were trained with WHO modules.

This important visit follows the announcement made by Minister Huitfeldt in February 2022 of a significant multiyear agreement that will see Norway contribute approximately US$ 124.5 million over a period of four years to support of UNRWA core and humanitarian services.

Minister of Foreign Affairs of Norway, H.E. Ms. Anniken Huitfeldt, said: “I am very happy to visit the Baqa'a School today together with UNRWA. Norway and Jordan are close partners in enabling UNRWA to fulfill its mandate towards Palestine refugees. I was especially happy to have talked to the student parliament about their life and aspirations. I wish them all the best with the start of the new school year.”

UNRWA Chief of Staff Ben Majekodunmi said: “UNRWA is deeply grateful to the Kingdom of Norway for its tremendous financial assistance to the Agency over many years, as well as for Norway’s critical political support; both play a fundamental role in ensuring the Agency can deliver its vital services and contribute to regional stability.”

Norway is an active and supportive partner of UNRWA. In 2021, Norway contributed NOK 165 million (US$ 19.2 million) to the PB, NOK 84 million to the UNRWA Emergency Appeals (US$ 10 million), and NOK 8 million for the oPt Flash Appeal (US$ 1 million), which included top-ups to the UNRWA Syria Emergency Appeal in November and the Agency’s Programme Budget in December.