Home » Newsroom » Press Releases » From Mohammed Assaf, a Song for Solidarity
Back to Newsroom

From Mohammed Assaf, a Song for Solidarity 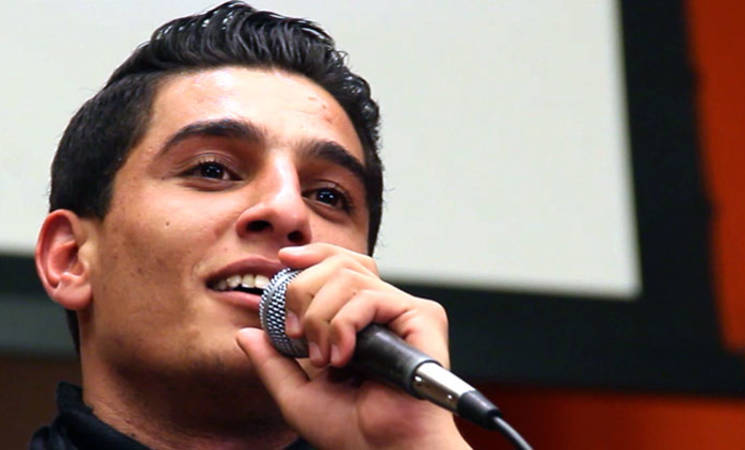 The United Nations Relief and Works Agency for Palestine Refugees (UNRWA) is proud to welcome its Regional Youth Ambassador, Mohammed Assaf, to United Nations Headquarters in New York. As the first goodwill ambassador in UNRWA history, he will join the Agency, the United Nations and Member States as they mark the thirty-fifth International Day of Solidarity with the Palestinian People, on 25 November.

Mr. Assaf was appointed UNRWA ambassador to Palestine refugee youth in June, by Commissioner-General Filippo Grandi. The 23-year-old Arab Idol winner is himself a Palestine refugee, who grew up in the Khan Younis camp in the Gaza Strip.

Currently on tour in the United States, Mr. Assaf will perform for hundreds of delegates  and civil society at the UN, bringing the sounds and rhythms of Palestine to New York with a song for solidarity. Describing the honour of bringing the voice of Palestine refugee youth to New York, he said: "I would like to remind you of the millions of other Palestine refugees just like me - the young men and women who are not standing here before you today. When we celebrate this International Day of Solidarity, they are the ones we need to remember. We are here to show solidarity with them and support their hope for, and their right to a better, brighter future". Mr. Assaf will also meet with UNRWA supporters at an event organized by American Friends of UNRWA.

Commissioner-General Filippo Grandi said: "I am very pleased to join Mohammed Assaf in marking the thirty-fifth International Day of Solidarity with the Palestinian People at United Nations Headquarters. With a language that is universal – music – and a voice that is unique, Mohammed has a real gift for bringing people together. Through his songs, he is connecting UNRWA and Palestine refugees, like himself, with the world community, represented here at the UN.”

Outlining Mr. Assaf’s role as Regional Youth Ambassador, the Commissioner-General said that he had been tasked with taking UNRWA’s message to young people, explaining its efforts to help them acquire the skills and knowledge they need. It is equally important that Mohammed helps the international community better understand the hopes, desires and needs of Palestine refugee youth.

Both Mr. Grandi and Mr. Assaf stressed that Palestine refugees are facing extreme challenges throughout the region, and that in Gaza the situation is growing increasingly precarious. The past several years of conflict and closure have had a crippling impact on the people of the Gaza Strip, particularly the younger generation, who grow up in an environment of increasing poverty, insecurity and isolation. The hope of these young people for a secure, peaceful future depends on the support of the international community.