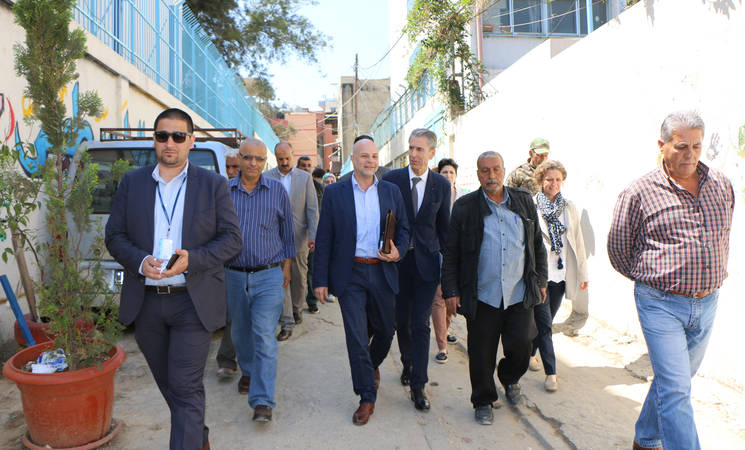 Today the Minister of Foreign Affairs and Cooperation of Monaco, his Excellency Gilles Tonelli, visited Beddawi camp in north Lebanon accompanied by the Director of UNRWA Affairs in Lebanon, Claudio Cordone.

During the visit, Monaco announced a new contribution to the United Nations Relief and Works Agency for Palestine Refugees in the Near East (UNRWA) in support of the Agency’s Medical Hardship Fund (MHF).

The visit aimed at seeing firsthand the needs and living conditions in Palestine refugee camps with special attention being given to health and Monaco’s support to the Medical Hardship Fund.

Since 2011, Monaco had also contributed to the strengthening of diabetes and cardiovascular care for Palestine refugees in Lebanon, by supporting key specialist personnel, capacity building and equipment in UNRWA health centers.

The delegation visited an UNRWA health clinic where they were briefed about the services provided.

“The partnership and support from Monaco has always been invaluable to the Agency. This new contribution comes at a time when UNRWA faces a formidable challenge in preserving key services like health care for Palestine Refugees,” said Mr. Cordone.

Mr. Tonelli recalled that health is the priority sector of intervention of the international cooperation policy. “In Lebanon, the Principality of Monaco supports health projects in vulnerable territories. In this framework, UNRWA is a key partner and the Principality would like through this visit to reassure the organization and the Palestine refugees of its continued support,” said Mr. Tonelli.

The partnership with Monaco has been further strengthened through the additional contribution, which comes on top of an existing three-year commitment to support the Medical Hardship Fund (MHF). The Medical Hardship Fund ensures better access to treatment for poor and vulnerable patients with severe and chronic health conditions, by providing them additional financial support for their hospitalization. Conditions eligible include Multiple Sclerosis, Cancer, Thalassemia and Sickle Cell Anemia.

About the International Cooperation of Monaco

The international development policy of the Government of Monaco is focused on fighting poverty. In accordance with national policies of partner countries, Monaco intervenes in three priority areas: health, education and socioeconomic integration. Each year, Monaco provides support to more than 130 projects in 11 partner countries in Sub-Saharan Africa and the MENA region. In 2018, official development Assistance of Monaco increase by 15 per cent for a total amount of EUR16 million, more than one per cent of the public budget that is allocated to international development policy.