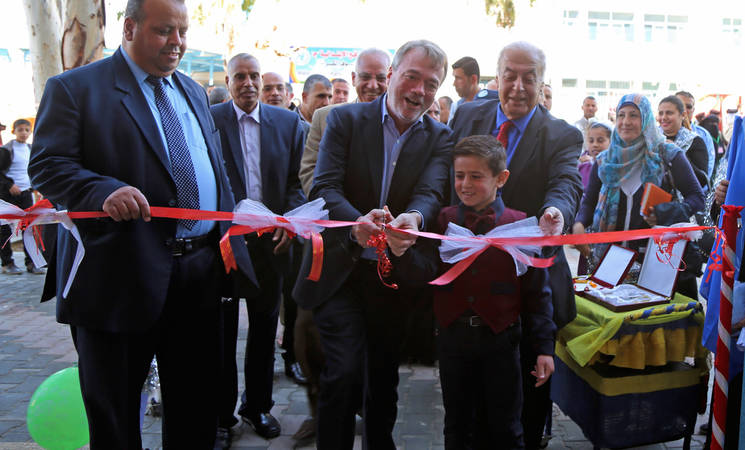 On 29 February 2016, UNRWA opened the new Sa’d al-Abduallah al-Sabah building in the UNRWA Ibin Sina Elementary Boys School in Rafah, southern Gaza. This is one of the Agency’s many construction projects in Gaza. The opening ceremony was attended by the Director of UNRWA Operations in Gaza, Bo Schack; other senior UNRWA staff; and representatives from the UNRWA schools’ parents’ councils and leaders from the Rafah community.

The construction of the new building – made possible through generous support from the Kuwaiti Development Fund through the Islamic Development Bank (IDB) – has allowed the school to work on a single-shift basis since February 2016, serving one of the most crowded and poorest neighbourhoods in Rafah. Prior to this, and for the past 20 years, the old building of Ibin Sina operated on a double shift, accommodating two UNRWA schools: the Ibn Sina Elementary Boys School and Rafah Elementary C Boys School.

The new building includes a multipurpose room; a ‘Special Education, Special Needs’ room; rooms for health and school counsellors; a library; a computer lab; a school canteen; water tanks operating on solar energy; and an elevator providing access to the upper floors for students with disabilities.

“Today’s opening represents an important and more conducive learning environment for Palestine refugee children in Rafah,” said Mr. Schack. “I would like to recognize the contribution from the Kuwaiti Development Fund – through the generosity and commitment of such donors, UNRWA is better positioned to provide a strong education programme for Palestine refugee children in Gaza.”