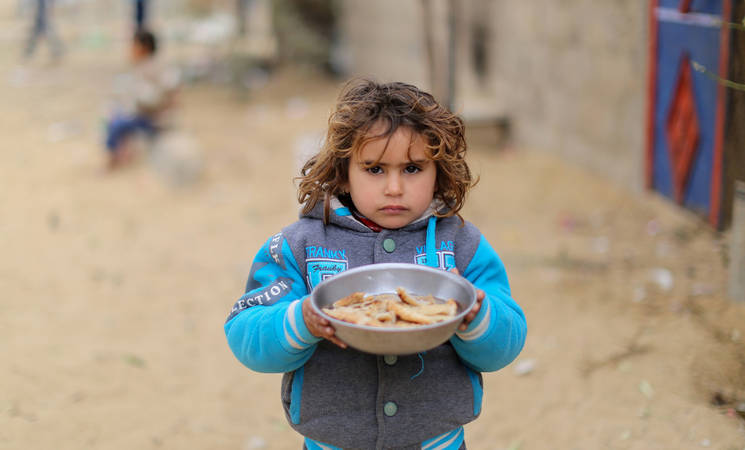 At a time when Muslims around the world are observing the holy month of Ramadan, often characterized by the festive nature of its Iftars, in Gaza, more than half the population depends on food aid from the international community.  Unless UNRWA secures at least an additional US$ 60 million by June, our ability to continue providing food to more than 1 million Palestine refugees in Gaza, including some 620,000 abject poor - those who cannot cover their basic food needs and who have to survive on US$ 1.6 per da y - and nearly 390,000 absolute poor - those who survive on about US$ 3.5 per day – will be severely challenged.

UNRWA is funded almost entirely by voluntary contributions and financial support has been outpaced by the growth in needs. From fewer than 80,000 Palestine refugees receiving UNRWA social assistance in Gaza in the year 2000, there are today over one million people who need emergency food assistance without which they cannot get through their day. “This is a near ten-fold increase caused by the blockade that lead to the closure of Gaza and its disastrous impact on the local economy, the successive conflicts that razed entire neighborhoods and public infrastructure to the ground, and the ongoing internal Palestinian political crisis that started in 2007 with the arrival of Hamas to power in Gaza,” said Matthias Schmale, Director of UNRWA Operations in Gaza.

Moreover, the tragic death of 195 Palestinians – including 14 students from UNRWA schools and the long-lasting physical and psychological injuries of 29,000 people during the year-long demonstrations known as the Great March of Return - come after three devastating conflicts in Gaza since 2009, which resulted in at least 3790 deaths and more than 17,000 injuries combined.

A report issued by the United Nations (UN) in 2017 predicted that Gaza would be unlivable by the year 2020.  Today, with over 53 per cent unemployment rate among Gaza’s population and with more than one million people dependent on quarterly UNRWA food handouts, it is mostly preventive humanitarian action of UN agencies, including UNRWA, and remittances from abroad that have held Gaza back from the brink of total collapse.

At a time of increased uncertainty about the future of the Israel-Palestine peace process, UNRWA is one of the few stabilizing elements in a very complex environment. By continuing to deliver upon its mandate, the Agency remains a critical lifeline in Gaza, where its services in health and education and its defense of rights and dignity are indispensable to the most of Gaza’s 1.9 million inhabitants. Most urgent though is the food assistance that the Agency provides to counter the food-insecurity of more than one million Palestine refugees.

This Ramadan, UNRWA has launched the Be the Light Campaign for food insecure Palestine refugees in Gaza. The campaign calls on people of goodwill to share the blessings of the holy month by providing emergency food baskets for the most vulnerable children and their families in Gaza. For more information visit: https://donate.unrwa.org/gaza