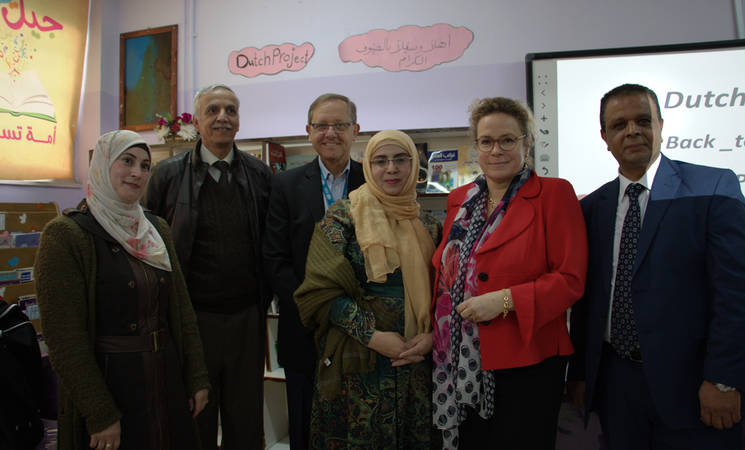 The Kingdome of the Netherlands contributed US$ 2.3 million to support the education of Palestine refugee from Syria children in Jordan. The contribution includes support for the rehabilitation  and maintenance of 82 buildings housing 141 schools, in addition to the provision of furniture and educational tools. The contribution also supported the provision of 1500 school-kits, including bags and stationary, to Palestine refugee students displaced with their families from Syria and attending UNRWA schools in Jordan.

At a ceremony held at Zarqa Preparatory Girls School to mark the contribution, HE Barbara Joziasse, Ambassador of the Kingdom of the Netherlands to  Jordan said: “Safeguarding UNRWA’s ability to sustain service provision to its vulnerable target groups in Jordan and those arriving from Syria is important for the Netherlands. In addition, we in Jordan, are particularly focusing on their children as they are the future and need to have equal opportunities to develop to their full potential. Therefore, one of our core priorities of our program is to secure access to quality education in safe spaces. Throughout several interventions the Netherlands aims at protecting this increasingly vulnerable group of Palestinian Refugees from Syria from dangers of exploitation in difficult times.”

Affirming the importance of UNRWA role in providing humanitarian assistance to those in need, the Ambassador said: “We are honored to contribute to the maintenance and rehabilitation of 82 UNRWA schools, provide for school materials as well as teachers’ salaries. I take this opportunity to extend my appreciation to the UNRWA-office for all the efforts exerted at providing a dignified life to the people who have been entrusted to them.

Speaking at the ceremony the Director of UNRWA Operations in Jordan, Roger Davis, expressed his gratitude to the Kingdome of the Netherlands, saying: “The long-lasting successful partnership and support by Netherlands to Palestine refugees is fundamental at a time when UNRWA continues to reach to its traditional donors as part of its Dignity Is Priceless global campaign. This donation have enabled UNRWA in Jordan to rehabilitate and maintain over eighty per cent of its schools, at a time when UNRWA is experiencing an unprecedented financial crisis. The new educational tools will enable students to experiment with and learn advanced technological and communication skills.