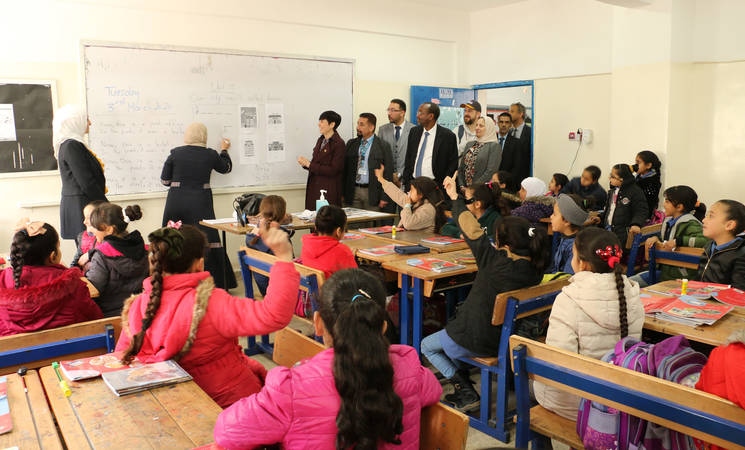 Today, the Minister of Foreign Affairs of Norway, Her Excellency Ms Ine Eriksen Søreide, visited a health centre and a school run by the United Nations Relief and Works Agency for Palestine Refugees in the Near East (UNRWA) in Amman. She was accompanied by the Acting Commissioner-General of UNRWA, Mr. Christian Saunders and the Director of UNRWA Affairs in Jordan, Mr. Mohammed Adar.

At the Antenatal Care Centre in Amman New Camp, just south of the capital, the Minister received information about the Agency’s health programme, especially services that seek to improve maternal health, mitigate health risks on pregnant women and newborn children, and promote reproductive health generally.  She later met the students and staff of the UNRWA Amman New Camp Preparatory Girls’ School and engaged in a lively discussion with a group of students representing the school parliament from that area about their dreams and future plans.

H.E. Ms Ine Eriksen Søreide said: “Jordan is an important partner to the Palestine refugees and UNRWA. I appreciate this opportunity to visit New Amman Camp, to meet some of the inhabitants and to visit their school, library and health clinic.”

”The renewal of the UNRWA mandate must be accompanied by sufficient funding, enabling UNRWA to deliver basic services to the refugees. We encourage other donors, not least the countries in the Gulf, to maintain or increase their contributions and transfer their support as soon as possible,” she added.

On the occasion of the visit of the Minister, Norway disbursed its contribution of around US$ 13.3 million to the UNRWA core budget.

Jordan hosts more than two million registered Palestine refugees, the highest number of all of the UNRWA fields. There are ten recognized Palestine refugee camps throughout the country, accommodating nearly 400,000 people. UNRWA extends its health, education, social and other services also to nearly 17,000 thousand Palestine refugees from Syria (PRS) who have fled the conflict and who, for the most part, are believed to suffer from abject poverty and a precarious legal status. UNRWA is working to accommodate PRS children in its schools and to provide relief and health care to those in need.

“We truly value Norway as a donor and as a partner in our efforts to alleviate the plight of Palestine refugees, but also in understanding that UNRWA plays a key stabilizing role in the region, primarily by providing reliable and predictable services to 5.6 million Palestine refugees,” said Mr. Saunders