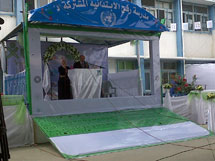 One Laptop per Child (OLPC), a non-profit organisation whose mission is to help provide every child in the world access to a modern education, is partnering with the United Nations Relief and Works Agency for Palestine Refugees in the Near East (UNRWA) to bring new learning opportunities to nearly half a million Palestine refugee children by 2012. The distribution of XO laptops in UNRWA schools is fundamental to OLPC’s mission to give connected, power-efficient and robust laptops to children around the world, especially those who have been displaced by conflict and those living in extreme poverty.

UNRWA operates one of the largest school systems in the Middle East and has been the main provider of basic education to Palestinian refugees for over six decades. The Agency provides primary schooling free of charge for Palestine refugee children in five areas – the occupied Palestinian territory (West Bank and Gaza), Lebanon, Syria and Jordan.

“Core to our mission is providing the world’s most isolated and vulnerable children access to modern forms of education and the opportunities that follow,” said Nicholas Negroponte, chairman and founder of One Laptop per Child. “The XO laptop has a special place in children’s education in regions that are disrupted by ongoing political unrest and violence. With the XO, the children can continue to stay connected and gain the skills and knowledge required to participate fully and thrive in the 21st century – even when getting to school is impossible.”

“Our partnership with One Laptop per Child has much potential to help us improve the way we work,” said UNRWA Commissioner-General Filippo Grandi. “It combines so much of what I consider to be to important priorities for UNRWA: concrete partnerships, innovative technology and new educational initiatives, bringing hope and a belief in a peaceful future for the next generation of Palestinians.”

Today in the city of Rafah (19 miles south of Gaza City), officials from OLPC, UNRWA and other NGOs and donors, local dignitaries, parents, teachers and children are celebrating the deployment of the first 2,100 XO laptops at the Rafah Co-Education Elementary School D. Along with OLPC and UNRWA, the deployment is also supported by the Jordanian Hashemite Charitable Organization (JHCO) and the Office of the President (Mahmoud Abbas) of the Palestinian National Authority.

OLPC has worked closely with UNRWA on teacher training and the development of localised software and content for the XOs. 200 teachers have already been trained and more than 150 electronic learning modules are being adapted for use on the XO. OLPC and UNRWA are also collaborating on the formatting of electronic textbooks and workbooks for an entire primary school curriculum.

With the rapid shifts in the use of technology by students, in and out of the classroom, combined with the significant increase in the use of computers and digital media in education and teacher training programs, it has become clear that adoption of the one laptop per child model, where each child owns a connected laptop, has tremendous promise for enhancing students’ education and their chances in the job market for years to come.

Child ownership and the saturation of laptops in a community are fundamental steps in providing ubiquitous access to digital information technology and extending education beyond the school walls. It means that every student or teacher is given access to a computer, the Internet and software anytime and anywhere. It allows children to learn from each other, direct their own learning and take the laptop home so it also becomes a family and community resource.

In addition to the new XOs in Rafah, OLPC has previously delivered 1,000 machines to Ministry of Education schools in the West Bank towns of Ramallah and Nablus and a further 500 machines to the UNRWA Amari Girls and Boys Schools in Ramallah.

About the One Laptop per Child

One Laptop per Child is a non-profit organisation created by Nicholas Negroponte and others from the MIT Media Lab to design, manufacture and distribute laptop computers that are inexpensive enough to provide every child in the world access to knowledge and modern forms of education.

UNRWA provides assistance and protection to Palestine refugees in Jordan, Lebanon, Syria and the occupied Palestinian territory, pending a just and lasting solution to their plight. It does so by offering to a population of some 4.7 million refugees a range of human development and humanitarian services in primary and vocational education, primary health care, social safety-net, community support, infrastructure and camp improvement, microfinance and emergency response, including in situations of armed conflict. UNRWA’s role also encompasses advocacy and actions to address the human rights and protection needs of Palestine refugees.