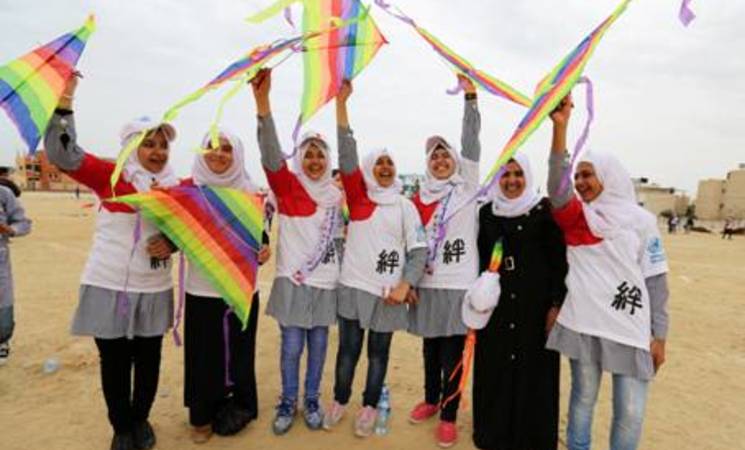 On the fifth anniversary of the most powerful earthquake ever recorded to hit Japan, messages of continued empathy and solidarity fly in the skies of Gaza. Over 1,000 Palestine refugee students from three UNRWA schools located in the Japanese housing project gathered to fly kites in commemoration of the disaster that killed more than 15,891 people and caused immense damage.

UNRWA students in Gaza were engaged in flying the kites at the Japanese re-housing project quarter in Khan Younis, southern Gaza, together with the participation of more than 300 other children with special needs from different community-based organizations (CBOs) in Gaza.

“The enthusiasm for the annual kite-flying reminds us of the strong relationship between Gaza and Japan. UNRWA shares the students’ messages of hope and solidarity with the Japanese people,” said Melinda Young, Director of UNRWA Operations in Gaza (OiC).

To encourage a strong relationship between children from Gaza and Japan, students from both sides exchanged messages about their daily life and experiences through a live online chat session via Skype.

The fifth annual kite-flying event in Khan Younis highlights the strong ties between the Japanese people and Palestine refugees in Gaza. The event is a reminder of both people’s strength and resilience.