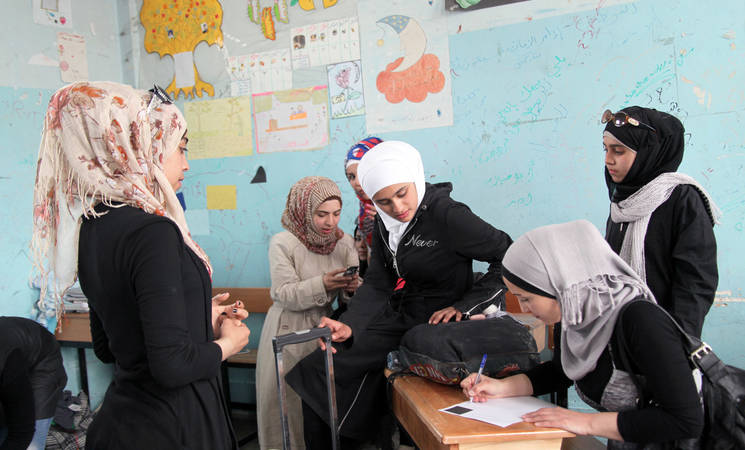 Palestine refugee students have been returning to the besieged refugee camp of Yarmouk, Damascus, after they spent the past two weeks taking national exams outside the camp. A total of 152 ninth grade students were involved.

“I am looking forward to returning to Yarmouk to see my family. I have been here for two weeks but it feels like a year away from them,” said Khaled, who is among those who returned to the camp on 31 May.

For the past two weeks, with the support of the UNRWA and the Syrian General Authority for Palestinian Arab Refugees (GAPAR), 152 students from Yarmouk boarded at the UNRWA Palestine School and the GAPAR-run Said al-Ass Institute in Alliance, Damascus. UNRWA teachers volunteered to prepare the students to sit for their national exams while counsellors ran psychosocial support sessions.

Yarmouk stands as a symbol of the extreme civilian suffering in the ongoing conflict in Syria. Residents have had limited access to food, water, electricity and social services for two years. Yet despite these harrowing circumstances, education remains one of the greatest priority for the Palestine refugee community in Yarmouk.

“Our students’ tenacity is a testament to the resilience of the Palestine refugee community in Yarmouk, who continue to prioritize education despite devastating circumstances,” said UNRWA Director in Syria Michael Kingsley-Nyinah.  “Education remains a critical source of hope for civilians living though immense trauma.”

On May 28, suitcase in hand, 152 Palestine refugee students from the Yarmouk said goodbye to the UNRWA teachers and counsellors. Fifteen-year-old Khaled said: “I am looking forward to returning to Yarmouk to see my family. I have been here for two weeks but it feels like a year away from them.”

UNRWA is seeking an immediate injection of US$ 30 million to provide life-sustaining assistance to the 18,000 civilians from Yarmouk, including 3,500 children, and those affected by conflict and displacement in other areas. This emergency call for funds is part of the UNRWA Syria Crisis Appeal, which provides critical humanitarian support to 480,000 Palestine refugees throughout Syria and to those displaced to Lebanon and Jordan.