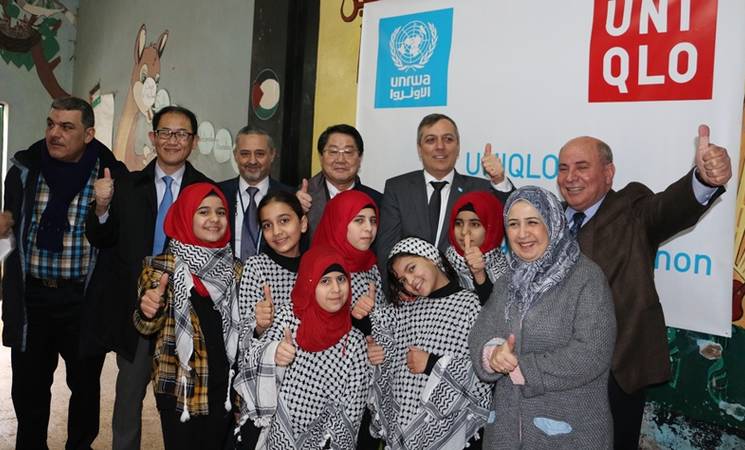 On Monday, 13 February, the United Nations Relief and Works Agency for Palestine Refugees in the Near East (UNRWA) held a ceremony in Burj Barajneh refugee camp in Beirut, Lebanon, to recognize the generous in-kind donation of winter clothes, valued at nearly US$ 500,000, from Fast Retailing Co. Ltd., which owns the globally renowned UNIQLO clothing chain, to help some of the most vulnerable Palestine refugees in Lebanon. The ceremony was attended by His Excellency Matahiro Yamaguchi, Ambassador of Japan to Lebanon, and Hakam Shahwan, acting Director of UNRWA Affairs in Lebanon, as well as Yukihiro Nitta, Group Senior Vice-President of Corporate Social Responsibility at Fast Retailing Co. Ltd.

To help address this issue, UNIQLO donated around 43,000 pieces of winter clothing to UNRWA this year, targeting some 21,500 impoverished Palestine refugees (40 per cent of whom are from Syria) living in nine Palestine refugee camps across Lebanon. Through this generous donation, UNIQLO, with the support of the Japanese NGO ‘Campaign for the Children of Palestine’ (CCP), is helping families to cope with the difficult circumstances they face; it is one of the many distributions being carried out in Lebanon with the support of Women’s Programme Associations across the country.

Commenting on the recent donation, Mr. Nitta said, “We are pleased to have been donating UNIQLO clothes to refugees and displaced people all over the world for over 10 years. Our clothing is very comfortable and easy to wear, and I hope that the items we have donated today can help to keep people warm and happy.”

Recognizing the donation, Mr. Shahwan said: “I would like to acknowledge the generosity of UNIQLO and recognize its donations over the past two years to Palestine refugee families, especially children, to help them to survive the winter. Thanks to today’s donation, more than 22,000 Palestine refugees in Lebanon will receive winterization support from UNIQLO.”

He continued, “I want to applaud UNIQLO for its leading example of corporate philanthropy and kindness to Palestine refugees living in very difficult circumstances in Lebanon and greatly appreciate its ongoing support for Palestine refugees.”

Following the ceremony, clothes were distributed to beneficiaries from the Burj Barajneh camp. The delegation subsequently visited the camp to see first-hand the situations that the camp’s residents live in and met with Palestine refugee beneficiaries from Lebanon and from Syria.

In 2015, UNIQLO generously donated 1,000 pieces of clothes and 500 pairs of socks to 250 Palestine refugee children from Syria children living in Wavel camp, Beqaa. The distribution was done in close cooperation and coordination between UNRWA and the Japanese NGO CCP Japan.

During the 2016-2017 winter season, UNRWA also received 2,400 pieces of winter clothing from CCP Japan, which were distributed in January 2017 at the Taberia School in Wavel.