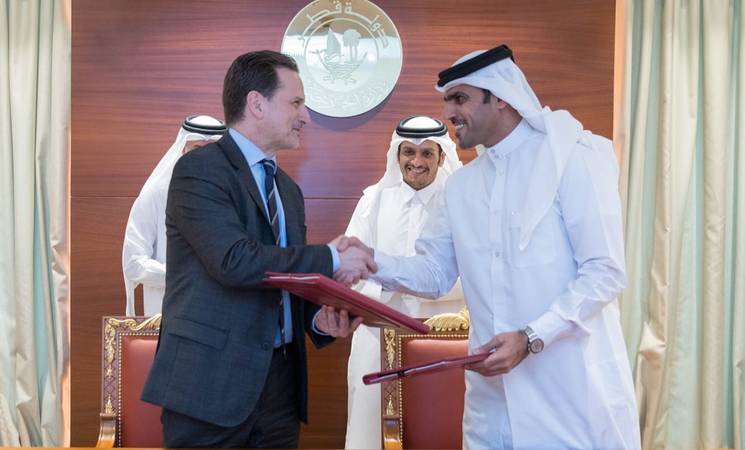 In the presence of His Excellency Sheikh Mohammed bin Abdulrahman bin Jassim Al-Thani, Deputy Prime Minister and Minister of Foreign Affairs, UNRWA Commissioner General Pierre Krähenbühl and His Excellency Mr. Khalifa Bin Jassim Al Kuwari, Director-General of the Qatar Fund for Development signed on Wednesday in Doha a memorandum of understanding in the amount of US$ 50 million. This highly generous contribution by the State of Qatar is crucial to safeguard Palestine refugees’ access to essential education in 2018.

These funds will be utilized immediately to sustain the Agency’s education services in all five fields of operations, namely, Jordan, Gaza, the West Bank including East Jerusalem, Syria, and Lebanon between June and October of this year. The State of Qatar announced the pledge at the UNRWA Extraordinary Ministerial Conference that took place in Rome on 15 March.  This was the largest financial commitment made during the Conference, which was held to address the Agency’s critical funding shortfall.

UNRWA Commissioner General Pierre Krähenbühl expressed his profound appreciation to the State of Qatar for this vital contribution and said: “The outstanding demonstration of support by the State of Qatar and the Qatar Fund for Development will not only help stabilize UNRWA funding for its operations this year, but it will also encourage other partners to strengthen their commitments and join our efforts to prevent a major humanitarian crisis”. “I wish to thank the State of Qatar, the Qatar Fund for Development and the Qatari people for this remarkable contribution of US$ 50 million, and I look forward to an enhanced and deepened partnership between the Agency and Qatar,” continued Mr. Krähenbühl.

Qatar Fund for Development Director-General Khalifa Bin Jassim Al Kuwari said: “This agreement aims to ensure that the provision of basic services to Palestinian refugees is not interrupted. This is an affirmation of Qatar's firm position on the Palestinian issue and the State's special interest in helping to provide its brothers in Palestine with the most basic needs in order to live a dignified life.”

With this contribution this week, which coincidently marks 70 years of displacement for this vulnerable community, Qatar becomes one of the Agency’s top donors to its core operations for 2018. The funding will allow for the continued delivery of UNRWA core services across the region during this period of dramatic financial crisis and political upheaval.

"I am determined to help students to be outstanding"
VI BRUSSELS CONFERENCE ON SYRIA: UNRWA REITERATES ITS CALL FOR SUPPORT TO PALESTINE REFUGEES
UNRWA Commissioner-General calls for support to Palestine Refugees in Syria ahead of the VI Brussels International Conference on “Supporting the Future of Syria and the Region”
Syria: UNRWA condemns armed attack against one of its installations in Dera’a Camp
unrwa: syria - humanitarian snapshot, january & february 2022
unrwa: syria - humanitarian snapshot, september & october 2021
syria: unrwa - progress highlights of emergency appeal january-june 2021