Home » Newsroom » Press Releases » Saudi Arabia donates US$ 86 million to support UNRWA projects in Gaza, the West Bank and Lebanon
Back to Newsroom

Saudi Arabia donates US$ 86 million to support UNRWA projects in Gaza, the West Bank and Lebanon 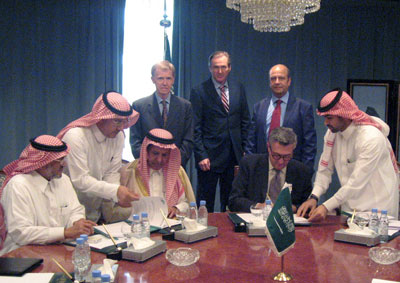 The Kingdom of Saudi Arabia, through the Saudi Fund for Development (SFD), has donated US$ 86 million to the United Nations Relief and Works Agency for Palestine refugees (UNRWA) for projects in the West Bank, Lebanon and Gaza. The three agreements were signed in Riyadh by SFD Vice-Chairman and Managing Director Yousef Al Bassam and UNRWA’s Commissioner-General Filippo Grandi.

“Each of these agreements is valuable,” accepting the contribution, Commissioner-General of UNRWA Filippo Grandi said. It is well known that the infrastructure of our refugee camps in the West Bank needs attention. This is more true of camps in Lebanon like Ein el-Helweh. It is also clear that the huge Nahr el-Bared camp rebuilding project desperately needs more funding, and that Gaza has multiple needs as it continues to face a blockade which paralyses most of its economic activity. We and the refugees we serve are immensely grateful to the Custodian of The Two Holy Mosques for providing the necessary direction to the concerned government agencies to help UNRWA in this open-handed way.”

UNRWA’s Commissioner-General was joined by the Director of UNRWA Operations in Gaza Robert Turner who gave a detailed presentation on UNRWA’s Gaza recovery plan.

The Kingdom of Saudi Arabia through the SFD is one of UNRWA’s major donors and the foremost Arab donor. Projects funded by Saudi Arabia have included contributions to the reconstruction of Nahr el-Bared refugee camp in Lebanon, support to UNRWA core activities in health, education and relief and social services, as well as the flagship Saudi project to rehouse Palestine refugees in Rafah, phase I of which was inaugurated in February this year.

Financial support to UNRWA has not kept pace with an increased demand for services caused by growing numbers of registered refugees, expanding need, and deepening poverty. As a result, the Agency‘s General Fund (GF), supporting UNRWA’s core activities and 97 per cent reliant on voluntary donor contributions, has begun each year with a large projected deficit. Currently the deficit stands at US$ 66.9 million.