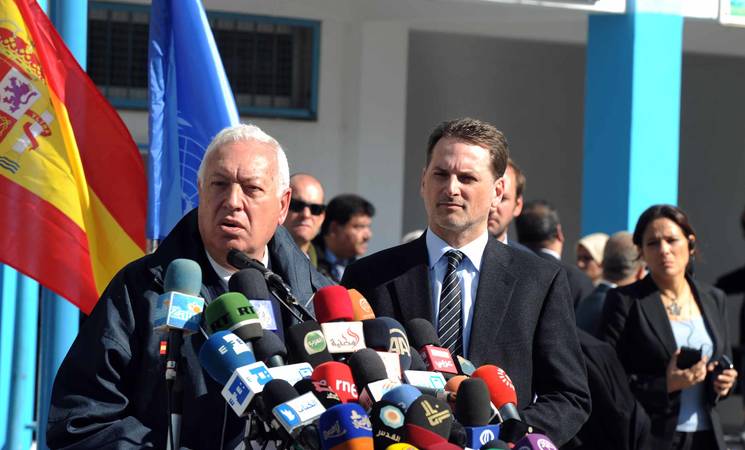 The Spanish Minister for Foreign Affairs and Cooperation, H.E José Manuel García-Margallo, visited Gaza today to see firsthand the situation following last summer’s conflict and to hear about the long-term humanitarian and political support required to help families in Gaza recover and rebuild. He also was interested to see the impact that Spanish contributions are having on the people in the Strip. This is the first visit by a Spanish Foreign Minister to Gaza since 2005.

The Foreign Minister’s visit followed a week of winter storms in Gaza, which saw the coastal strip battered by freezing winds and rains, making life all the more trying for the families whose homes are among the 96,000 damaged or destroyed by the summer’s conflict.

The winter storms have heightened the vulnerability of a population that is struggling to recover from the 50-day conflict. Reconstruction is slow and discontent is growing as funds and support fail to materialize. To date, some US$ 135 million has been received by UNRWA, leaving a funding gap of US$ 585 million for shelter assistance. UNRWA is warning that unless the current situation changes, funds for cash assistance will run out in February.

Thanking Spain for its continued commitment and support to Palestine refugees in Gaza, UNRWA Commissioner-General Pierre Krähenbühl said: “We are grateful for the support from Spain and appreciate the Minister’s visit to the region. Continued political attention, financial contributions and focus on Gaza in these critical winter months are essential in helping families to rebuild their lives. Sustainable recovery in Gaza will. however, also require all of us to look beyond the immediate challenges. Lifting the blockade and addressing Gaza’s many other obstacles are key elements to strengthening dignity and attaining self-sufficiency for women, men and children here.”

Minister García-Margallo stated: “I would like to convey Spain’s solidarity with the people in Gaza at this very challenging moment. It is our intention to continue supporting Palestine refugees and UNRWA. Let me stress the importance of the international community coming together to provide the funds so urgently needed to help thousands of families rebuild their homes and secure safe and warm accommodation until these repairs take place.”

Spain is an important partner for UNRWA, contributing reliably to the Agency’s general operations, and providing valuable flexibility to meet emerging needs. The 2014 contribution from Spain to Palestine refugees, through UNRWA, totaled US$ 8.3 million including contributions from central and local governments and the private sector.  Of this, US$ 1.3 million has been pledged towards Gaza reconstruction. Spain has been a valued member of the UNRWA Advisory Commission since 2005.