Home » Newsroom » Press Releases » Sports for Dignity
Back to Newsroom 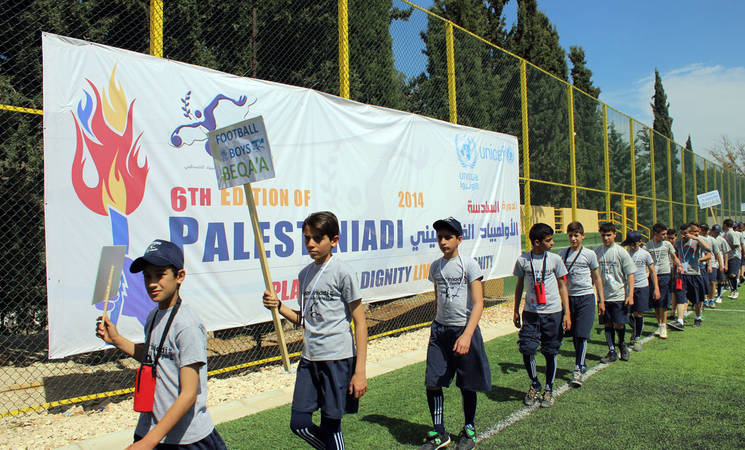 The opening ceremony of the three-day sports event, on 25 April, took place in Saida, southern Lebanon, and was attended by the Director of UNRWA Affairs in Lebanon, Ann Dismorr; the Deputy Representative of UNICEF Lebanon, Luciano Calestini; Cultural Advisor of the Embassy of Palestine, Maher Moshail; and the Representative of the Lebanese Palestine Dialogue Committee, Lina Hamdan.

“Children are children everywhere, regardless of their nationality or whether they have a disability; all children have the right to play and to enjoy recreational activities”, said Mr. Calestini during the ceremony. “Sports provide this vehicle, which is vital for the physical development and psychological well-being of children and adolescents, especially those affected by the Syria crisis.”

The games will take place from 25 to 27 April, during which period over 300 students from all the Palestine refugee camps across Lebanon, as well as Lebanese students, will benefit. They will compete at the UNRWA Siblin Training Centre in six categories: football, table tennis, running, volleyball, basketball and chess. On 27 April, medals will be distributed to the winners and participants of the various events. This is the sixth edition of the successful Palestiniadi programme, which was formerly supported by Italy’s Cooperazione Internazionale (COOPI).

UNICEF and UNRWA have a long-standing partnership in Lebanon. UNICEF remains one of the largest UNRWA partners in education and health for Palestine refugee children. Since 2012, UNICEF has provided US$ 4.4 million to assist Palestine refugee children from Syria in the fields of education, child protection, health and sanitation. In addition, UNICEF has contributed to regular UNRWA programmes with a total of US$ 1.2 million since 2011 towards learning support activities and back-to-school kits.