Thanks to a generous donation from the Government of Finland, on Saturday 15 June the gates were opened to start the UNRWA Summer Fun Weeks 2013.
Between 15 June and 4 July, 150,000 children are expected to participate in an array of activities from football to kite flying and inflatable toys to traditional games. The activities are specifically designed to encourage creativity and provide relief from the pressure and challenges of daily life, giving the children the support they require and deserve growing up in Gaza.
“These weeks of fun, sports and games are tremendously important for the psychosocial wellbeing of the refugee children of Gaza”, says Scott Anderson, deputy director of UNRWA operations in Gaza, “Being able to do all this with friends in a safe environment is unfortunately not normally an option.” 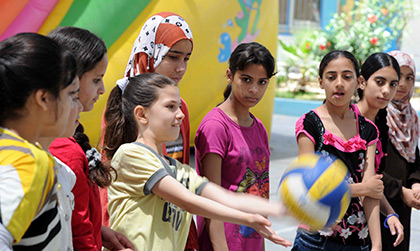 With over half of Gaza’s population under the age of 18, UNRWA’s Summer Fun Weeks are a much needed break from the harsh reality of the environment and are therapeutic for children living under a crippling blockade and scarred by poverty and violence.
Read more about summer Fun Weeks.
– Ends –
Background information
UNRWA is a United Nations agency established by the General Assembly in 1949 and is mandated to provide assistance and protection to a population of some 5 million registered Palestine refugees. Its mission is to help Palestine refugees in Jordan, Lebanon, Syria, West Bank and the Gaza Strip to achieve their full potential in human development, pending a just solution to their plight. UNRWA’s services encompass education, health care, relief and social services, camp infrastructure and improvement, and microfinance.
Financial support to UNRWA has not kept pace with an increased demand for services caused by growing numbers of registered refugees, expanding need, and deepening poverty. As a result, the Agency‘s General Fund (GF), supporting UNRWA’s core activities and 97 per cent reliant on voluntary contributions, has begun each year with a large projected deficit. Currently the deficit stands at US$ 65 million.
For more information, please contact:
Christopher Gunness
UNRWA Spokesperson
Mobile: +972 (0)54 240 2659
Office: +972 (0)2 589 0267
c.gunness@unrwa.org
Christian Lindmeier
Senior Communications Officer
Mobile: +972 (0) 599 461 045
Office: +972 (0) 8 288 7946
c.lindmeier@unrwa.org
Milina Shahin
Public information Officer
Mobile: +972 (0) 599 609 485
Office: +972 (0) 8 2887 213
m.shahin2@unrwa.org
Background Information: