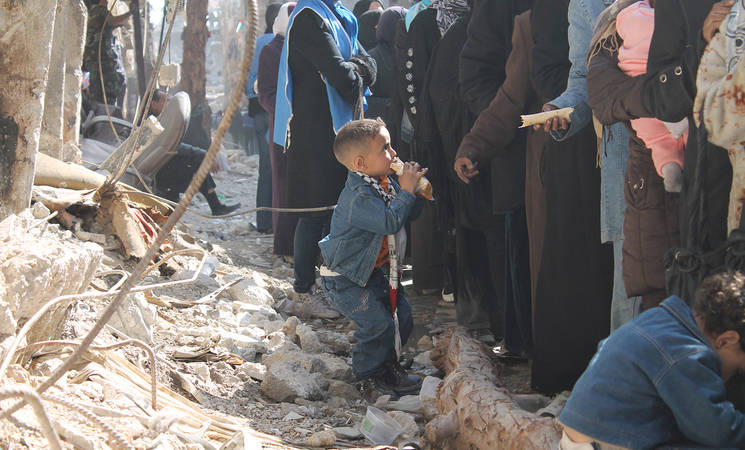 On 26 February, Islamic Relief Worldwide (IRW) and the United Nations Relief and Works Agency (UNRWA) signed an agreement for the provision of emergency assistance, worth a total of US$ 759,000, to Palestine refugees in Yarmouk camp and other Damascus areas characterized by severe hardship. The IRW contribution will enable distribution of food aid and emergency sanitary kits to more than 70,000 people.

IRW made its generous contribution just two days after UNRWA Commissioner-General Filippo Grandi visited Yarmouk, where he saw thousands and thousands of people queuing in the desperate hope of receiving food aid. The undeniable signs of deprivation and severe malnutrition among the men, women and children who had defied the threat of snipers and stray bullets to make the journey to the food distribution point at the outskirts of the camp underscored the importance of reliable and stable humanitarian access.

IRW and UNRWA share a deep concern for the Palestine refugees trapped in Yarmouk camp or living in despair in other camps and temporary shelters in the Damascus area, based on the understanding that Palestine refugees in Syria are particularly vulnerable. Over the past three years, many Palestinian families have been forced into a pattern of repeated displacement as the conflict spread and previously safe areas became dangerous. Some 200,000 are displaced in the Damascus area alone, while 70,000 are displaced elsewhere in Syria.

“Islamic Relief, recognizing the Syria crisis as one of the worst humanitarian disasters of the past decades, has worked since the beginning of the crisis to provide quick emergency aid in Syria and the affected regional countries. IR has extended and renewed its commitment to help Palestinian refugees in Syria through UNRWA, and appeals for unrestricted humanitarian access to communities trapped in the brutal conflict, ­ many of whom continue to suffer in besieged camps such as Yarmouk, in Damascus,” said Dr. Mohammed Alsousi, Head of Middle East Region for Islamic Relief.

“Knowing the massive need for emergency aid and food in particular to support Palestine refugee populations in Syria, we are grateful to receive the committed support of Islamic Relief Worldwide. Thanks to this new partnership between our two organizations, we will be able to make a life-saving difference for Palestine refugees in Syria”, said Lionello Boscardi, Chief of the UNRWA Partnerships Division upon signing the agreement.

Background information on the Islamic Relief

Islamic Relief Worldwide is an international relief and development charity which envisages a caring world where people unite to respond to the suffering of others, empowering them to fulfil their potential. IRW is an independent Non-Governmental Organisation (NGO) founded in the UK in 1984 by a group of concerned post-graduate students.