Home » Newsroom » Press Releases » With Support of US$ 1.5 million from the Khalifa Bin Zayed Al Nahyan Foundation 3,400 Palestine Refugee Students in Gaza Benefit from Distribution of School Supplies
Back to Newsroom

With Support of US$ 1.5 million from the Khalifa Bin Zayed Al Nahyan Foundation 3,400 Palestine Refugee Students in Gaza Benefit from Distribution of School Supplies 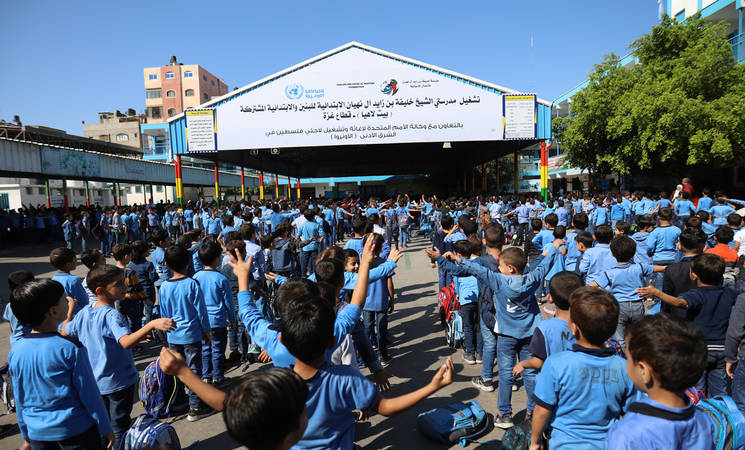 With a generous donation of US$ 1.5 million from the Khalifa Bin Zayed Al Nahyan Foundation and in cooperation with the United Nations Relief and Works Agency for Palestine Refugees in the Near East (UNRWA), Palestine refugee students received school supplies during a recent distribution. The Agency implemented a project to provide school supplies to students of the UNRWA Sheikh Khalifa Bin Zayed Al Nahyan Elementary Boys and Elementary Co-Educational Schools in northern Gaza, made possible with support from Khalifa Foundation.  School supplies were distributed to the entire student population at the schools, some 3,400 Palestine refugee youth. This activity is part of a project aimed at safeguarding the right to education for Palestine refugees in Gaza.

The humanitarian and socio-economic conditions of most of Gaza’s population of two million Palestinians continues to deteriorate under the Israeli-imposed blockade on Gaza, now in its thirteenth year. Three intense rounds of hostilities over the past 10 years have led to widespread destruction across the coastal enclave.

Since 2010, and for the ninth scholastic academic year, Khalifa Foundation and UNRWA have provided school supplies to students, assisting them with the right tools to foster a positive learning environment. The contribution included full school uniforms, winter jackets, equipment and furniture for both schools adopted by Khalifa Foundation. Also, as part of this distribution cycle over the past several weeks students received backpacks. This generous support by Khalifa Foundation will also fund the salaries of 89 teaching staff for the current academic year.

Mohammad Haji Al Khoori, Director-General of Khalifa Foundation confirmed that this Emirati initiative, in cooperation with UNRWA, will undoubtedly contribute to alleviating the heavy burden on students and their families in Gaza and will help the educational institutions there to continue to provide their services. Through this initiative, he expressed his hope to provide school students with stationery, tools and equipment needed, as well as to reinforce programs that support the educational process and its continuation in light of the conditions experienced by students in the Gaza Strip.

Director of UNRWA Operations in Gaza, Matthias Schmale said: “We are grateful for the long lasting and continuing support of the Khalifa Bin Zayed Foundation to the Agency’s Education program. This donation from Khalifa Foundation and the Government of the UAE will have a direct positive impact on education and learning experiences for thousands of Palestine refugees, who successfully started a new school year in Gaza a few weeks ago.”

UNRWA provides a range of critical services to some 5.5 million Palestinian refugees registered with the Agency across its five fields of operation, including Jordan, Lebanon, Syria, the West Bank, including East Jerusalem and the Gaza Strip. Its services include education, health care, relief and social services, camp infrastructure and improvement, protection, microfinance, and emergency relief.

A strong UNRWA in a challenging world
Statement by the UNRWA Spokesperson on Food Distribution in Gaza
For a third consecutive year, China provides support for UNRWA Food Assistance Programme in Gaza
UNRWA calls for unimpeded passage of all vital goods, including fuel for electricity, into Gaza
gaza’s “great march of return”, one year on
Occupied Palestinian Territory Emergency Appeal 2019
Occupied Palestinian Territory Emergency Appeal 2018