Home » Newsroom » Press Releases » Survey of Businesses in Syria: Overwhelming Destruction and Displacement
Back to Newsroom

Survey of Businesses in Syria: Overwhelming Destruction and Displacement 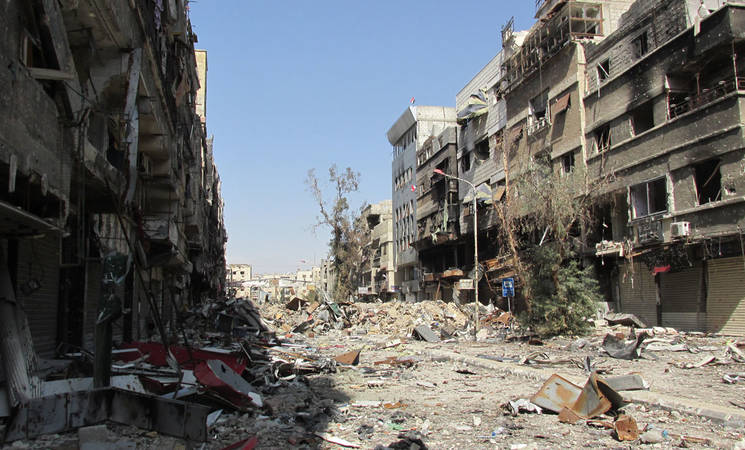 An unprecedented survey by the United Nations Relief and Works Agency (UNRWA) of its microfinance programme in Syria has found the impact of the conflict to be “overwhelming and traumatic”, with the vast majority of its clients displaced and in need of humanitarian assistance. The survey was conducted in what the report calls “an economic catastrophe”, from which it says the Syrian economy will take 30 years to recover to 2010 levels. However, displacement, physical destruction and looting have taken place on such a massive scale that only 13 per cent of businesses supported by UNRWA were able to survive.

“This is the first study of its kind and provides hard statistical evidence for the tragic and widespread impact the conflict is having on lives and livelihoods across Syria. In Yarmouk, which has been in the news headlines, 89 per cent of our microfinance clients have been displaced and just 3 per cent were able to continue in business”, said UNRWA Spokesperson Chris Gunness. “The figure for looting - 40 per cent of enterprises - tells its own story, as does the fact that 55 per cent of our clients had their homes damaged, with 14 per cent having their homes destroyed completely. Women-owned enterprises were worst hit, as almost two thirds of the damaged businesses belonged to women financed through the UNRWA Women’s Household Credit product.”

The survey also looks into the “coping mechanisms” of UNRWA microfinance clients and paints a grim picture. Forty-eight per cent of those surveyed suffered from inadequate shelter. The monthly income of 83 per cent of clients declined, while the cost of living had doubled during the three-year conflict.

The survey, conducted with the support of the European Union, focuses on the business situation and living conditions of UNRWA microfinance clients in Damascus and Aleppo in June 2013. It was based on a sample survey of 8,000 active clients, both Palestinians and Syrians.

On the importance of continuing UNRWA microfinance in Syria, Mr. Gunness said: “In the face of the ongoing conflict, our Microfinance Department has developed contingency plans to sustain the programme, with efforts to resume services in Damascus and Aleppo and a decision to open offices in three safer parts of Syria: Tartous, Latakia and Sweyda. UNRWA microfinance now plays a dual role in sustaining small businesses while providing vital input to the resilience and coping mechanisms of conflict-affected Palestine refugees.”