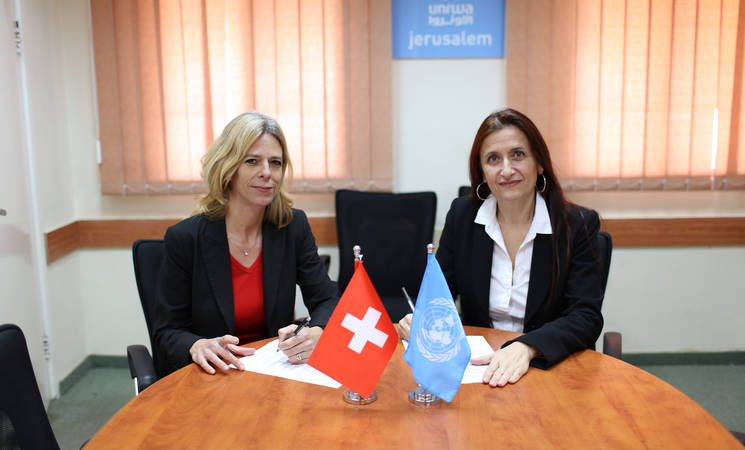 The Swiss Confederation, through the Swiss Agency for Development and Cooperation (SDC) has signed a multi-year agreement with the United Nations Relief and Works Agency for Palestine Refugees in the Near East (UNRWA) totaling CHF 75.5 million (approximately US$ 73.7 million) that will go towards the Agency’s core programmes and services – including education, health care, relief and social services and protection – over the 2017-2020 period.  This agreement comes shortly after Switzerland’s additional contribution of CHF 1.35 million (approximately US$ 1.32 million) in December 2016 to the UNRWA Emergency Appeal for the occupied Palestinian territory (oPt) to support the Agency’s temporary shelter cash assistance programme in Gaza and protection interventions in the West Bank.

“Given the myriad of challenges that Palestine refugees face today, predictable and reliable support from our partners remains critical in ensuring that their needs are met, not only in times of emergency, but also to support their long-term development,” said Francoise Vanni, the Director of the External Relations and Communications Department at UNRWA. “As such, on behalf of UNRWA, I would like to express my sincere gratitude to Switzerland for their ongoing support, which will enable us to continue delivering essential services to Palestine refugees throughout the region and help vulnerable refugees who are impacted by the challenging circumstances in the oPt.”

At the signing of this agreement, Véronique Hulmann, the Head of Swiss Cooperation Office, added: “Switzerland supports its multilateral partners with multi-year agreements to strengthen the predictability of their funding and to contribute to their financial sustainability, as pledged at the World Humanitarian Summit in 2016.”

In 2016, Switzerland contributed CHF 25.3 million (US$ 24.9 million) to UNRWA, including CHF 21.9 million to the Agency’s core programmes and services. It is currently the Chair of the UNRWA Advisory Commission, which advises and assists the Commissioner-General in carrying out the Agency’s mandate, and has been a member since 2005.