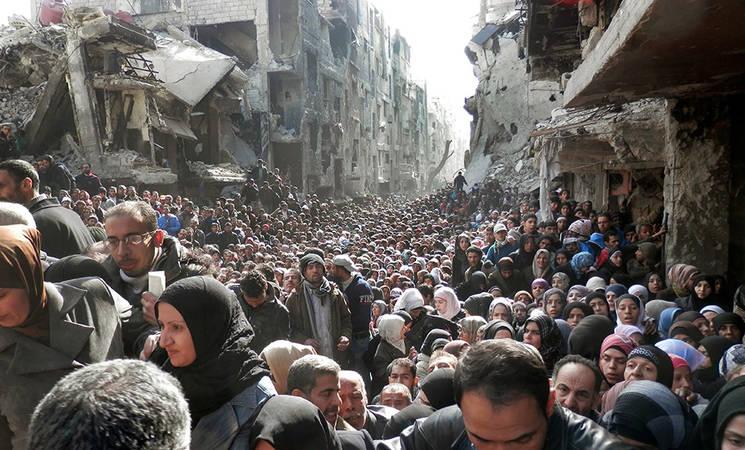 Ten years after demonstrations started in Syria, over half of the Palestine refugees in the country have been displaced at least once because of the brutal conflict that ensued, including 120,000 who have sought safety in neighbouring countries, mainly Lebanon and Jordan, and beyond. Once a vibrant community of over 550,000 people, Palestinians had come to Syria in two main waves in 1948 and 1967 to settle in 12 camps across the country. Yarmouk, the most famous of the Palestine refugee camps, became known as “the capital of Palestine refugees.”

In response to the Syria regional crisis, with its multiple layers of conflict, displacement, hardship and most recently, the COVID-19 pandemic, UNRWA is a lifeline to nearly 420,000 of the most vulnerable Palestine refugees in Syria. Cash assistance and food aid by the Agency are often the only fixed support they get.

In neighboring Jordan and Lebanon, a total of 45,500 Palestinian refugees from Syria receive health, education, social services and cash assistance from UNRWA to help cover their basic needs. But the funding crisis that has hit UNRWA in the last few years has also heavily impacted the Agency’s ability to adequately respond to the immense needs of Palestine refugees from Syria.

Since the start of the conflict, many UNRWA installations inside Syria, such as schools and health centers, have become inaccessible or sustained severe damage. Forty per cent of UNRWA classrooms have been lost and almost 25 per cent of the Agency’s health centres are currently unusable due to the conflict. UNRWA in Syria has also lost 19 staff members during the 10-year conflict.

“The daunting images of destruction in Yarmouk camp remain with me, even a few months after I visited Syria,” said Mr. Lazzarini. “Children in pink and blue school uniforms stepping out of the rubble to get on a school bus was a surreal sight.”

“Where Palestine refugees are able to safely return, UNRWA will do everything it can to give them access to basic services,” added the UNRWA Commissioner-General.

Read more about the individual plight of Palestine refugees in Syria, as well as those who have fled to neighbouring Lebanon and Jordan, on the UNRWA website (www.unrwa.org/Syria10) and on Facebook (www.facebook.com/unrwa), Twitter (twitter.com/UNRWA) and Instagram (instagram.com/unrwa/)