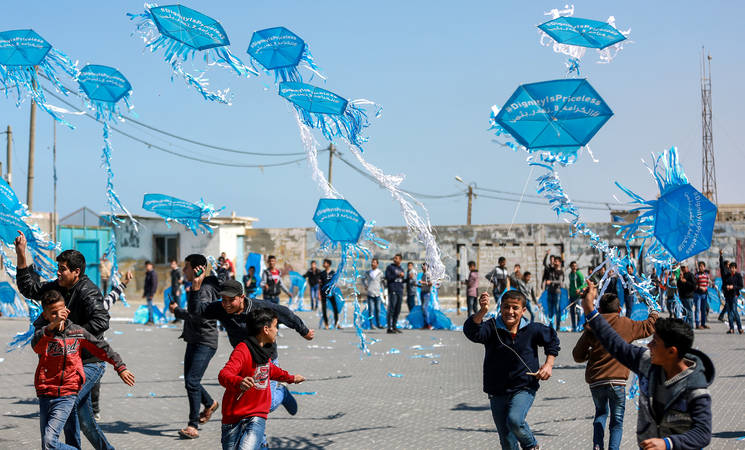 Today in 700 UNRWA schools across the Middle East, thousands of students flew and carried kites to send a message of hope, demanding that all the schools run by the Agency remain open, in spite of the financial crisis confronting UNRWA.  More than 500,000 students took part in kite flying events in Gaza, Jordan, Lebanon, Syria and the West Bank, where the Agency provides a daily education to 525,000 children.

This ambitious initiative comes in advance of an Extraordinary Ministerial Conference in Rome on 15 March convened by Jordan, Sweden and Egypt to bridge UNRWA’s funding shortfall for 2018 of  446 million US$. UNRWA has described this as the worst financial crisis in its seventy year history.

Ahmad Jamal, Secretary of UNRWA’s student parliament urged the international community to go to Rome with additional funds for the Agency. “On behalf of half a million children, the next generation in the Middle East, I appeal to you from my heart. I respectfully ask for your support to help us achieve our full potential”. Referring to the global fund raising initiative, #DignityIsPriceess, launched by UNRWA in January, he said, “hand in hand with UNRWA, we can, we will deliver, for our families, for our communities and for the Middle East. Our Dignity is Priceless”.

UNRWA Commissioner-General, Pierre Krähenbühl, endorsed the call by the students. “Together we stand for the rights and dignity of Palestine refugees”, he said “Together we also stand for the integrity, honor and mandate of UNRWA. We will defend them with passion and transform worries into positive energy and creative new initiatives. As a symbol of how strongly we feel about our services, we called on UNRWA students in all fields to fly kites today over our 700 schools as a message to the world that their dignity is indeed priceless!”

If UNRWA’s critical funding gap is not filled, not only is the daily education of over half a million children at risk, but the Agency’s health services may also impacted, such as the vaccination of 180,000 children this year and 9 million patient consultations delivered annually by UNRWA medical staff. In addition, the Agency delivers cash or food assistance to 1.7 million refugees, of which a million are in Gaza; supports 40,000 disabled refugees; provides recreational activities for 200,000 children and disburses forty million dollars of micro finance loans annually.