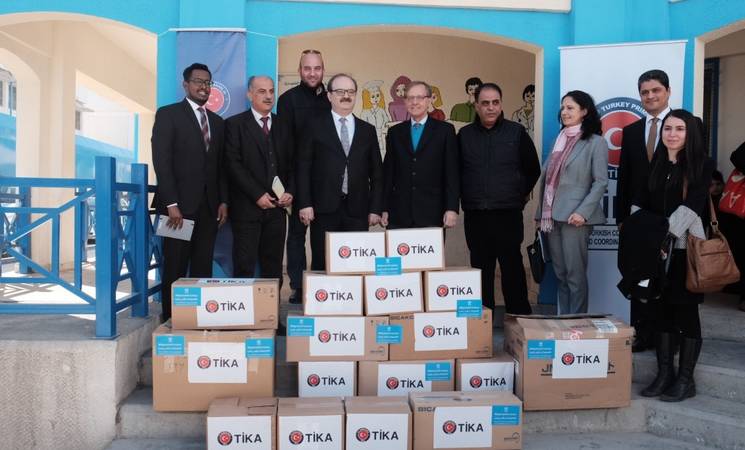 The Turkish Cooperation and Coordination Agency (TİKA) made a generous in-kind contribution of medical supplies to the Amman North Camp Health Centre of the United Nations Relief and Works Agency for Palestine Refugees in the Near East.  The in-kind contribution, consisting of an array of medical supplies, will benefit Palestine refugees living in the surrounding areas.

In his speech during the hand-over ceremony, Dr. Serdar Çam, the President of TIKA, emphasized that access to quality essential health care is among TIKA’s priorities and expressed appreciation to UNRWA and the Director of UNRWA Operation in Jordan, Mr. Roger Davies, for their important contribution in supporting Palestine refugees.

Mr. Davies used the opportunity to thank TIKA and confirmed the significance of TIKA’s support, stating that, “the donation comes at a challenging time for UNRWA and the Palestine refugees. It This contribution represents a key step that complements the Agency’s efforts towards the Agency’s recently launched #DignityIsPriceless fundraising campaign, which aims to raise US$ 500 million to address recent drastic reductions in funding and sustains the continued partnership we have.”  Elaborating on plans for future cooperation between TIKA and UNRWA, Davies added that, “we have discussed possible future support and cooperation for educational and health programmes in Jordan, which will be mapped out the next few months.”

TIKA is an international development agency under Republic of Turkey Prime Ministry to focus on development collaboration. Established in 1992, TIKA works in 140 countries, including the ones where their 60 offices are located. In 2016 TIKA office was officially opened in Amman. The office follows up on the implementation of Turkish technical aid and grant programmes in Jordan and ensures Turkey’s support for the implementation of projects. Turkey shares its knowledge and experience through TIKA, with many countries from the Pacific to the Central Asia, from the Middle-East and Africa to the Balkans and from Caucasia to South America.

TIKA carries out the task of being a cooperating mechanism for the state institutions and organisations, universities, non-profit organisations and the private sector. In addition, it functions as a platform for these actors to come together and it records the development aid carried out by Turkey.