Home » Newsroom » Press Releases » In times of crisis, UNRWA and the EU reaffirm the strength of their partnership
Back to Newsroom

In times of crisis, UNRWA and the EU reaffirm the strength of their partnership 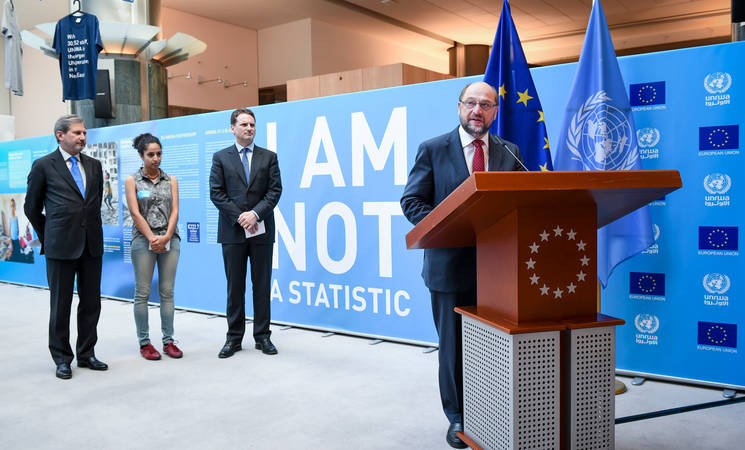 From 29 June to 1 July, UNRWA Commissioner-General Pierre Krähenbühl visited Brussels for a range of senior-level meetings to draw attention to the Agency’s crucial role and activities and to raise the alarm regarding its dramatic level of underfunding, as well as to officially open the UNRWA photography exhibition ‘I Am Not a Statistic’, held in the European Parliament until 3 July.

The exhibition features the winning photos from the EU-funded 2014 UNRWA Photo Competition and introduces visitors to the achievements of the longstanding partnership between UNRWA and the EU in supporting the human development, humanitarian and protection needs of Palestine refugees in a Middle East marked by growing insecurity and instability caused by conflicts, occupation, displacement and rising radicalization that is pushing increasing numbers of people to seek dangerous escape routes to Europe. The competition was conceived as an opportunity for Palestine refugee youth to capture the stories and emotions of the people affected by these traumatic events.

Illustrating the strong and dynamic partnership between the EU and UNRWA, the exhibition was awarded the High Patronage of the European Parliament and inaugurated by EU Parliament President Martin Schulz, Commissioner for European Neighbourhood Policy and Enlargement Negotiations Johannes Hahn, European External Action Service (EEAS) Managing Director Hugues Mingarelli and UNRWA Commissioner-General Pierre Krähenbühl. The Photo Competition’s second-prize winner, Manar Nakhleh, was also in attendance, representing the other prize winners. The prize winner from Syria was unable to make the trip, and the two from Gaza were not granted permits to leave Gaza, in many ways painfully symbolizing the fate of Palestine refugees at large.

"The European Union considers UNRWA a strategic partner, and we are proud to be its largest multilateral donor,” said Mr. Schulz in his inauguration speech. “Indeed, the Agency plays a vital role for the security, stability and human development of the region. As wars continue to devastate the Middle East, the EU must stand by UNRWA to help it carry its indispensable mission. Refugees are not statistics – they are people who want to contribute to our common humanity with their dreams, their energy and their talent.”

Mr. Hahn also shared his analysis and vision of the current state of affairs: “The situation of Palestine refugees in Gaza, in Syria and in other camps is constantly deteriorating, and the danger is that we become accustomed to this dramatic situation,” he said. “Today's exhibition reminds us that we should take the time to discover the human faces behind the statistics – people who, despite being trapped in a situation that has already become undignified for any human being, try simply to live a normal life. The EU is proud to support UNRWA in its invaluable work with Palestine refugees in Gaza, the West Bank, Jordan, Lebanon and Syria, providing them with access to primary education, health, and social services, even under very harsh conditions."

The UNRWA Commissioner-General’s visit to Brussels was also an occasion to meet on a bilateral basis with high-level representatives from the EU and its Member States, including Mr. Schulz; Mr. Hahn; EU Vice-President and Commissioner for Budget and Human Resources, Kristalina Georgieva; EEAS Executive Secretary-General, Alain Le Roy; the EU Political and Security Committee; and Belgian Minister for Development Cooperation, Alexander De Croo.

The UNRWA Commissioner-General briefed them on the Agency’s many important achievements and alarming financial situation. With a forecasted deficit of EUR 93 million (US$ 101 million) for the UNRWA General Fund, the Agency has implemented a set of stringent measures to minimize costs while maintaining core service delivery to refugees. However, some difficult decisions regarding the UNRWA school system, which serves half a million children across the Middle East in Jordan, Lebanon, the occupied Palestinian territory and Syria, may be needed in the coming weeks if the deficit is not filled.

“This level of underfunding is unprecedented and will have very direct and dire consequences on the Agency’s capacity to fulfil its mandate, as well as our ability to preserve past human development achievements,” said Mr. Krähenbühl, alluding to a recent World Bank Group report that praised the Agency’s educational system and highlighted Palestine refugee students’ above-average results.

The Commissioner-General also reminded the EU that UNRWA emergency appeals for both Syria and the occupied Palestinian territory are also severely underfunded (funded at 27 per cent and 30 per cent respectively), undermining the Agency’s capacity to provide life-savings services.

“The situation in the Middle East – with rising instability and an increased risk of radicalization – is one in which Palestine refugees face what are in many ways existential threats,” he continued. “Overlooking their vulnerability and needs is a risk the world cannot take, a luxury we do not have. We must act now by supporting the dignity and rights of Palestine refugees and helping to achieve a political resolution of the Israeli-Palestinian conflict.”

EU and UNRWA: a dynamic partnership

The European Union is the largest multilateral provider of international assistance to Palestine refugees, providing crucial and reliable support to UNRWA since 1971. Between 2007 and 2014, the European Union contributed over EUR 1 billion in support of UNRWA, including EUR 809 million to the General Fund. In addition, the EU has generously contributed to UNRWA humanitarian emergency appeals and projects in response to various crises and specific needs across the region. EU Member States provide additional crucial support to the Agency. The partnership between the EU and UNRWA has allowed millions of Palestine refugees to be better educated, live healthier lives, access employment opportunities and improve their living conditions, thus contributing to the development of the entire region.