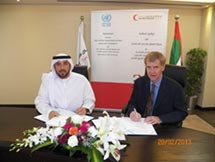 The United Nations Relief and Works Agency for Palestine Refugees in the Near East (UNRWA) and the United Arab Emirates Red Crescent (UAERC) have signed an agreement worth USD 8 million for the construction of four schools in the Gaza Strip.

This contribution will help to alleviate the effects of overcrowding in schools in Gaza, where most have to work on a double-shift system. The construction will start within a few weeks and the schools will be built in nine months. When ready, 1,000 pupils will be accommodated in each school.

Welcoming this contribution, UNRWA Commissioner-General Filippo Grandi said: “Once again the UAERC has demonstrated its longstanding commitment to UNRWA, and to improving the lives of Palestine refugees in Gaza.

“These new schools will create a better learning environment for thousands of Gazan schoolchildren, and I am deeply grateful to the UAE Red Crescent, to the ruling family, and to the people of the UAE, for this important contribution.”

Financial support to UNRWA has not kept pace with an increased demand for services caused by growing numbers of registered refugees, expanding need, and deepening poverty. As a result, the Agency‘s General Fund (GF), supporting UNRWA’s core activities and 97 per cent reliant on voluntary contributions, has begun each year with a large projected deficit. Currently, the deficit stands at USD 66 million

"I am determined to help students to be outstanding"
The European Union announces EUR 246 million three-year contribution in support of UNRWA and Palestine Refugees
While scars of conflict are still clear, hope and resilience among students remains steadfast
Hairdressing promoting empowerment in Lebanon: EU support galvanizes success
EU support to the education of Palestine refugees
EU and UNRWA: Together for Palestine Refugees
Al Shuraka 13