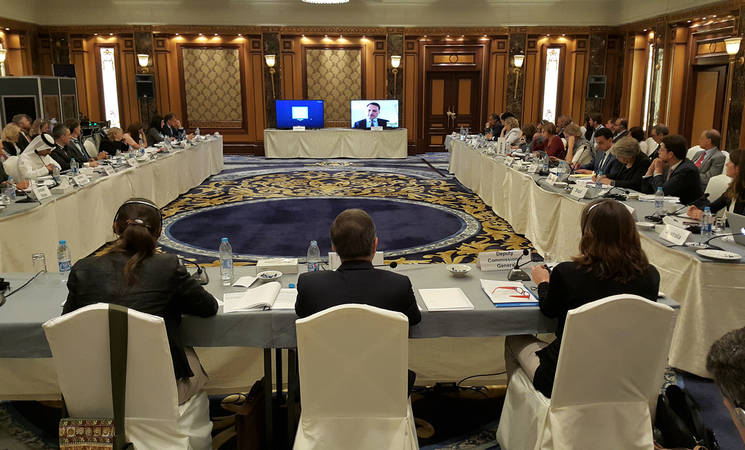 The United Nations Relief and Works Agency, UNRWA, is holding an extraordinary session of its Advisory Commission today, to discuss the Agency’s most severe financial crisis ever. The Commission will review the growing risk  that UNRWA  may have to delay the start of the academic year in some 700 schools for half a million students across the Middle East unless the deficit of US$ 101 million can be fully funded before the school year is due to start. The session is taking place in Jordan and brings together leading UNRWA donors and host governments.

“I am alarmed that our current funding crisis may force us to consider a delay in the start of the school year,” said UNRWA Commissioner-General Pierre Krähenbühl. “Such a decision would generate much anxiety and despair for hundreds of thousands of boys and girls, deeply dedicated to their studies. Education lies at the very heart of the identity and dignity of Palestine refugees and of what UNRWA stands for. Our schools also provide a measure of stability in a very unstable region. Possible delays in opening the school year would also have grave implications for host governments.”

The extraordinary Advisory Commission session will be discussing a special report to be sent by the Commissioner-General to United Nations Secretary-General Ban Ki-moon and on to all 193 members of the United Nations. The report sets out the implications of the Agency’s US$ 101 million deficit for 2015, the measures the Agency has taken to reduce costs, and the strenuous efforts to seek the necessary funds. It also outlines urgent steps that could be taken to put UNRWA on a firm financial footing going forward.

As things currently stand, UNRWA has enough money to maintain its services essential to protect public health, which includes immunizations for children, primary health care, relief and sanitation and some emergency programmes through to the end of 2015, but the funding is insufficient to guarantee the stable provision of its education services from September onwards.

The Agency calls on all donors, partners and UN member states to actively step forward with critical funding to allow the school year to begin without interruption and to preserve the historic investment in human development of Palestine refugees, recognized as one the most successful processes of its kind in the Middle East. Ensuring the continued provision of education is a matter of dignity, rights and regional stability.