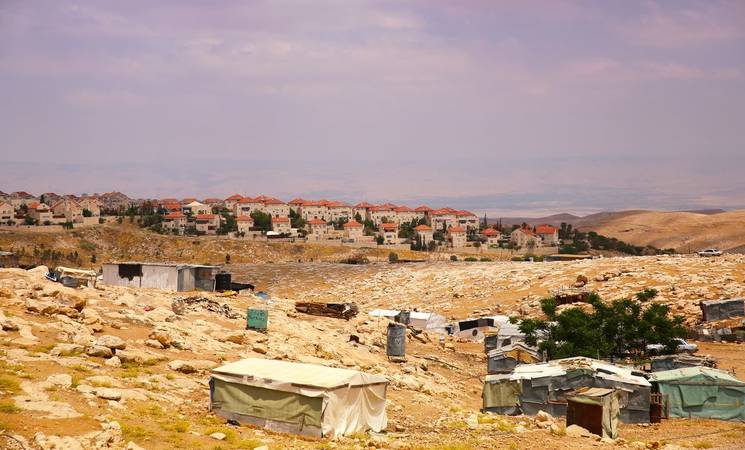 The Humanitarian Coordinator for the occupied Palestinian territory, James W. Rawley, and the Director of UNRWA Operations West Bank, Felipe Sanchez, expressed their grave concern today that Israel is rapidly advancing plans to transfer Palestinian Bedouins in the central West Bank from their current communities.

The UN Secretary-General has recently expressed concern in a report of March 2015 that “(p)lans to transfer thousands of Bedouin and herders […] may also be connected with settlement expansion. The Bedouins and herders are at risk of forcible transfer, a grave breach of the Fourth Geneva Convention, as well as multiple human rights violations.”

On 28 April, residents of Abu Nwar were informed that some families would have to move to the Al Jabal area outside of East Jerusalem, where the Israeli authorities have been preparing the ground for the past months. “Israeli practices in Area C, including a marked increase of demolitions and confiscations of donor-funded structures in the first quarter of 2015, have compounded an already untenable situation for Bedouin communities,” said Mr. Rawley.

Abu Nwar is one of 46 Palestinian Bedouin communities (~7,000 people, 70 per cent of whom are Palestine refugees) in Area C slated for transfer to three proposed “relocation” sites. “For Abu Nwar, or any other communities in the immediate E-1 vicinity, this would represent a continuation of developments  that commenced in 1997 when Palestine refugees were loaded on trucks and taken to the same urban site in Eizariya, after which an illegal settlement was constructed on their former land,” said Mr. Sanchez. “History has shown us that these transfers have not proven to be in the interests of the Bedouin communities.”

The plan occurs against the backdrop of a discriminatory zoning and planning regime that facilitates the development of illegal Israeli settlements at the expense of Palestinians, for whom it is almost impossible to obtain permits for construction. Instead, they live in constant fear of eviction and home demolitions. The forced urbanization of Bedouin communities in the three relocation sites would destroy their culture and livelihoods.

“There is also concern over the strategic implications of these plans, given that many of the communities are located in areas slated for further Israeli settlement, including the E1 plan, which has long been viewed as an obstacle to the realization of a two-state solution”, said Rawley.

“We are fast approaching the point of irreparable damage,” advised Sanchez. “As occupying power, Israel is obligated to ensure the wellbeing of these communities and to respect international law. I strongly urge the Israeli authorities to halt all plans and practices that will directly or indirectly lead to the forcible transfer of the Bedouin and call on the international community to support the Bedouins’ wish to remain where they are, pending their return to the Negev, and prevent this transfer from occurring.”