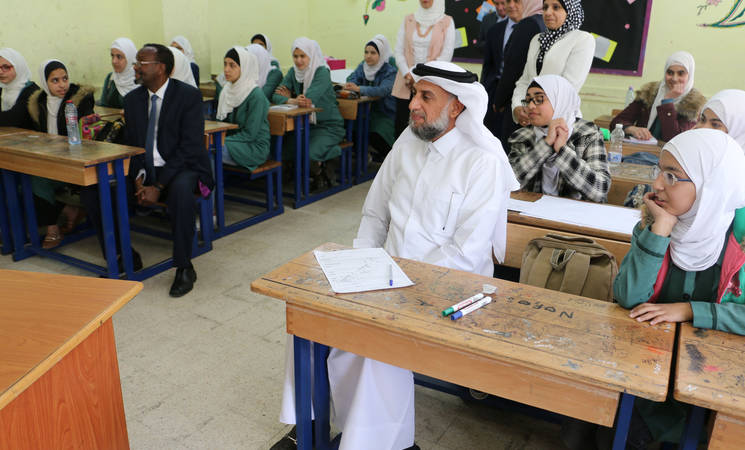 The visit aimed to provide a firsthand look at the needs and living conditions of Palestine refugees in Jordan. Dr. Al Meraikhi visited the Amman New Camp Health Centre, where he was briefed about the services provided by the Agency to the approximately sixty thousand residents of the camp. He then toured the UNRWA Amman New Camp Preparatory Girls’ School, where he met with students and school parliamentarians. He conveyed to them messages about the importance of education as an opportunity for growth. He also visited Palestine refugee families in the camp and was briefed by UNRWA representatives about the daily lives of Palestine refugees in Jordan and discussed their social and economic situation. The visit also sought to ensure the humanitarian needs of Palestine refugees are communicated. Dr. Al Meraikhi was joined by famed Qatari composer and songwriter Dana Al Fardan. Her participation comes as part of an upcoming UNRWA and Qatar Red Crescent Society joint campaign called ‘Hope for Gaza’. Inspired by Palestine refugees, Ms. Al Fardan composed a song entitled “Bloom” for the UNRWA Ramadan campaign.”

Dr. Al Meraikhi underscored United Nations and global support to Palestine refugees and emphasized the importance of stability in Jordan and the greater Middle East. “We see the challenges that UNRWA has faced and have also observed the increased demand for services for the increased refugees in all fields. I encourage all Member States to rise to the challenge again this year as they have done in years past and continue to support the Agency and Palestine refugees,” he stated.

Mohammed Adar, Director of UNRWA Operations in Jordan said: “As a son of the region and an envoy of the UN Secretary-General, Dr. Al Meraikhi’s visit serves to highlight the importance of the Agency’s work and impact on the well-being of Palestine refugees and to bring the messages from the refugee community itself to the donors and general public.”

Amman New Camp, known locally as Wihdat, was one of four camps set up after 1948 to accommodate Palestine refugees who fled as a result of the 1948 Arab-Israeli war. The camp was established in 1955 on an area of 0.48 square kilometres, just southeast of Amman. The refugees were initially housed in 1,400 shelters constructed by UNRWA, and in 1957 the Agency built an additional 1,260 shelters. In the absence of a just solution to their plight, Palestine refugees have built on these initial shelters to improve their living conditions. The camp has grown into an urban-like quarter, reflecting the needs of its inhabitants.

UNRWA installations in the camp provide services for the refugees residing in the camp and for those living in its surroundings. In addition to thirteen schools and one health centre, the camp houses one community-based rehabilitation centre, one women’s programme centre, one environmental health office and one camp services office.