Home » Newsroom » Press Releases » UN Secretary-General Guterres to Palestine Refugees in Lebanon: Do Not Lose Hope
Back to Newsroom

UN Secretary-General Guterres to Palestine Refugees in Lebanon: Do Not Lose Hope 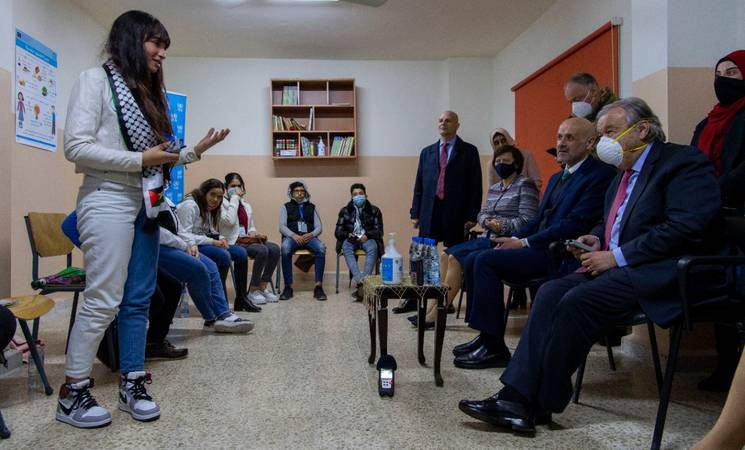 Yesterday, United Nations Secretary-General António Guterres visited the Lydda Co-Ed School of the United Nations Relief and Works Agency for Palestine Refugees in the Near East (UNRWA) in Tripoli, accompanied by a senior UN delegation.  The Lebanese Minister of the Interior, Bassam Mawlawi, was also present.

Mr. Guterres met with student members of the School Parliament, as well as parents and a teacher, hearing about their concerns and aspirations.  Among the students, Wasim spoke about the increase in transport costs due to the economic crisis which prevent parents from sending their children to school.  Jamal, a Palestinian Refugee from Syria, described how his father does not have money for rent, clothes and food, and how he often goes to sleep on an empty stomach.  Students are eager to learn and have a future: Zeina spoke about the importance of education and her dream to get a scholarship to study astronomy abroad.

The Secretary-General also heard from Ahmad, a parent, about the general living conditions of Palestine refugees in Lebanon, the restrictions of their rights and the need to ensure that UNRWA is able to maintain its vital services, especially education and health.  He heard from teacher Iman how students are often distracted in class because of their difficult living conditions at home and how they lack modern equipment, such as computer labs.

Mr. Guterres expressed his solidarity with the Palestine refugees. He apologized for the inability to secure all the necessary support for students and parents and stressed his determination to raise the necessary funding for UNRWA to continue providing its services. He also promised to continue to work for a peace process which would result in a two-state solution and which would end the plight of the refugees. Mr. Guterres’ concluding message to everyone was on the importance of not losing hope.