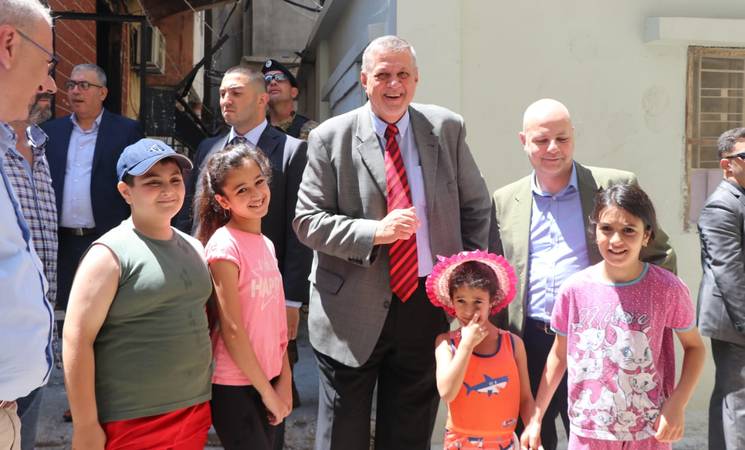 The two UN officials toured the camp and the areas affected by the clashes in 2018 and met with families to hear firsthand about their living conditions.

Mr. Kubis and Mr. Cordone then met with the Mayor of Mieh Mieh municipality Mr. Rafaat Saed Abusaba accompanied by mukhtars and municipality representatives, later they met with representatives of the Lebanese Armed Forces who gave a briefing about the security situation.

“I welcome the efforts made by the Palestinian factions and the Lebanese authorities to organize and ensure the safety and security of the Mieh Mieh camp, its residents and the neighboring community.” Mr. Kubis said. “Also important are the living conditions of the Palestine refugees, their protection needs, and their human rights while reconfirming their right of return. We urge the international community to provide increased assistance to UNRWA and the authorities of Lebanon to take positive steps to ensure their rights and dignity in accordance with respective international conventions and norms so that their living, social, and humanitarian needs are met” he added.

During his meeting with Mieh Mieh Mayor, Mr. Kubis expressed his and the UN appreciation for hosting for decades Palestinians in Mieh Mieh, but also Ein El Hilweh camps. “This generosity is highly appreciated but Lebanese authorities and international community including the UN ought to understand and react better also to the needs and concerns of this and other host communities and increase their support.” Mr. Kubis said.  He welcomed the cooperation between Lebanese authorities and Mieh Mieh representatives and underlined the importance of continuous dialogue between the Lebanese and the Palestinians.

Mr. Cordone thanked Mr. Kubis for his visit and for supporting UNRWA and reiterated the Agency's commitment to provide assistance and protection to Palestine refugees. He said, “UNRWA stands in Mieh Mieh and in other camps to protect the rights and dignity of Palestine refugees until a just and lasting solution to their plight is achieved. The support of the whole UN family is key in achieving our goals.”

A strong UNRWA in a challenging world
The European Union contributes EUR 30.6 million to support Palestinian Refugees in Lebanon
UNRWA Commissioner-General on official visit to Lebanon
Dispatches from the Field: story Manal Bishr
Lebanon: UNRWA Humanitarian Snapshot, November & December, 2019
A Journey Into the Lives of Palestinian Refugees from Syria in Lebanon
Youth Strategic Framework for Palestine Refugees in Lebanon