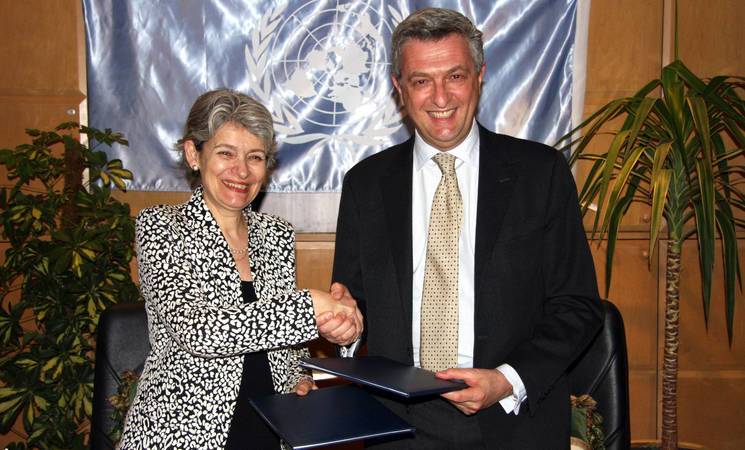 The UN Relief and Works Agency for Palestine Refugees in the Near East (UNRWA), which provides assistance and protection to nearly five million Palestinian refugees, and the United Nations Educational, Scientific and Cultural Organization (UNESCO), announced the signing of a Memorandum of Understanding (MOU) to formally renew a sixty-four year partnership between the two agencies in support of education for Palestine refugees.

The signing of the MoU recognizes the importance of this longstanding commitment and allows UNESCO and UNRWA to continue to work together. The MOU, signed in the presence of Director-General of UNESCO Irina Bokova, and Commissioner General of UNRWA Filippo Grandi on 18 March in Amman, and of Caroline Pontefract, Director of UNRWA/UNESCO Education Department, flags up the opportunity for increased mutual cooperation as both Agencies work to develop education in the context of the 21st century, and the new demands this brings. It further recognizes the important role UNRWA plays in being directly responsible for the teaching and learning of 500,000 Palestine Refugee students in its five fields of operation. Through this MOU, UNESCO is renewing its commitment to provide high level technical support to UNRWA’s education programme.

“With the Syrian conflict entering its fourth year, and in this particularly challenging time for the region, the signing of the MOU is an important milestone for UNRWA’s education programme and UNESCO’s commitment to it,” said UNRWA Commissioner General Filippo Grandi. UNRWA is one of the largest and longest lasting UN operational endeavors in education. Partnership began in 1950, right after the General Assembly had established UNRWA to help Palestinian refugees. At that time, UNESCO assumed technical responsibilities for the educational services to be provided by UNRWA, marking the birth of the UNRWA/UNESCO Education Programme.

“UNESCO has always been proud to partner with UNRWA, which operates one of the largest school systems in the Middle East,” said Irina Bokova, Director-General of UNESCO. “This  agreement aims to further strengthen this partnership and bring enhanced visibility to our work, because we share the conviction that quality education is a fundamental human right and the foundation for giving Palestinian children the knowledge and skills they need for their future."

UNESCO’s support will also be invaluable towards UNRWA’s work in providing inclusive and quality education to over 41,000 Palestine refugee students from Syria receiving emergency education. UNRWA is working with UNESCO, and other UN agencies to provide educational support during the Syria crisis to the students displaced not only in Syria but also in Lebanon and Jordan.