The United Nations calls for resolute action on Gaza 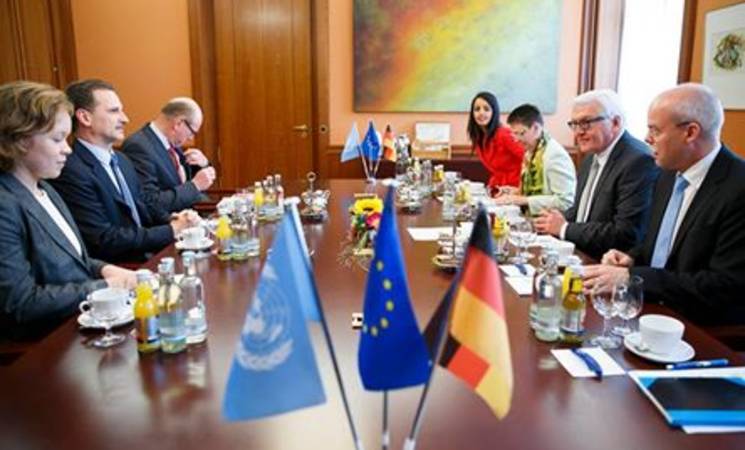 The United Nations Relief and Works Agency (UNRWA) has called for political action to resolve the underlying causes of conflict in Gaza and prevent another round of destruction. Speaking on his first visit to Germany since taking over the position of UNRWA Commissioner-General, Pierre Krähenbühl said, “We have moved beyond the realm of humanitarian action alone. As the donor community intensifies its discussions on rebuilding Gaza after the recent conflict, it is important to address the causes of the violence and escape the tragically familiar pattern of blockade, conflict and destruction. We owe this to the people of Gaza who have suffered enough.”

Krähenbühl thanked “the government and people of Germany who have provided long-standing, reliable support for UNRWA and the Palestine refugees it serves. These contributions are particularly important during times of crisis, and in this context, I would like to give special thanks for Germany’s generous support during the recent Gaza crisis.” During his first official trip to Germany, Krähenbühl met with Federal Foreign Minister Frank-Walter Steinmeier, Parliamentary State Secretary in the Ministry for Economic Cooperation and Development Thomas Silberhorn and senior officials at the Federal Chancellery. He also met with Members of Parliament and civil society.

Krähenbühl’s visit comes in advance of a meeting in Cairo on 12 October that will bring together leading members of the international donor community, the United Nations and the Palestinian Authority to discuss plans for Gaza and to make pledges for its reconstruction.

Just last week, UNRWA revised upwards its estimate of the destruction of property during the fighting. According to estimates based on preliminary information, up to 80,000 refugee homes were impacted during the 50 days of hostilities, which is higher than the total number of 60,000 originally estimated. UNRWA has initiated a package of assistance to refugees whose homes have been damaged or destroyed.

Germany has recently pledged US$ 12.4 million in support of psychosocial activities and the Job Creation Programme in Gaza, having already contributed US$ 10.7 million to provide food aid and essential non-food items to the people of Gaza. With the recent pledge to Gaza included, the total 2014 German contribution to UNRWA is US$ 42.1 million so far.