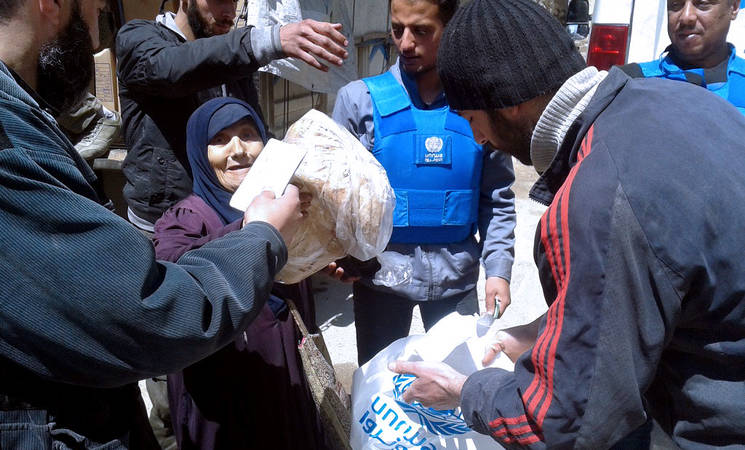 The United States Government announced a new US$ 6 million contribution to UNRWA on 24 April, making the United States one of the first donor countries to respond to the Agency’s April 17 call for funds to support Yarmouk. Announced at a UN Security Council Briefing on the Situation in the Middle East, the contribution will help UNRWA provide lifesaving assistance during an initial 90-day rapid response to civilians from Yarmouk and those affected by conflict and displacement in other areas in Syria.

“We are deeply grateful for all the support we have received from the US for our efforts to help citizens survive this tragedy,” said UNRWA Commissioner-General Pierre Krähenbühl. ”After enduring four years of conflict, two of them under siege-like conditions, and the suffering created by armed groups, the civilians in Yarmouk are at a breaking point.”

The US$ 6 million contribution is in addition to the US$ 57 million announced on March 31by the United States in support of the UNRWA Regional Syria Crisis Appeal.  Since the crisis began in 2011, the United States has contributed more than US$ 247 million to UNRWA emergency appeals for Syria, part of the nearly US$ 3.7 billion total provided by the United States to assist those affected by the conflict in Syria over the past four years.

Reiterating support for Palestine refugees in Syria and particularly those enduring the “devastating crisis in Yarmouk”, US Permanent Representative to the United Nations Ambassador Samantha Power said that the contribution will provide “urgent assistance, both for the many thousands still trapped in Yarmouk and for other Palestinians and Syrians receiving a lifeline from the Agency”.

UNRWA is providing humanitarian assistance to displaced civilians from Yarmouk and neighbouring areas, including food, clean water, and essentials like medicine, diapers, and soap. Mobile health points have been established to treat displaced civilians as well as host communities. To continue the provision of emergency aid, UNRWA is appealing for an immediate injection of US$ 30 million from the international community.  The UNRWA Regional Syria Crisis Appeal for 2015 is only 20 per cent funded.