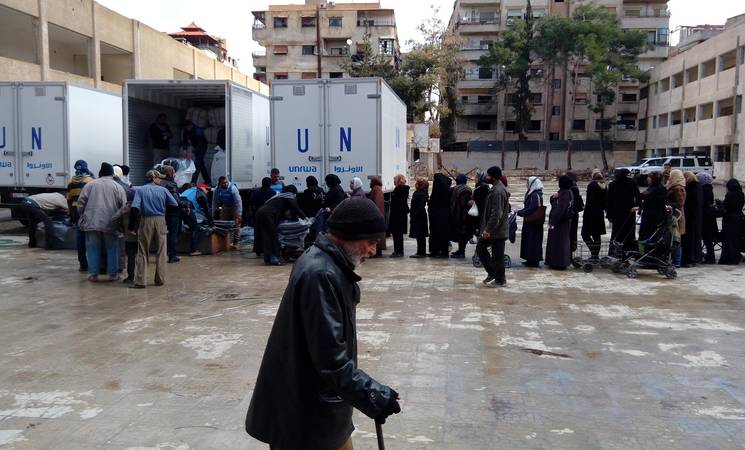 The United States is contributing US$ 25 million to the United Nations Relief and Works Agency for Palestine Refugees in the Near East (UNRWA) in response to the Agency’s 2016 Syria Regional Crisis Emergency Appeal. These funds will support UNRWA’s emergency operations in Syria, Lebanon and Jordan. The announcement was made by U.S. Secretary of State John Kerry during a ceremony in Washington D.C., on 12 July, as part of the country’s humanitarian response to the Syria crisis.

Since the beginning of the conflict in 2011, nearly 110,000 Palestine refugees registered with UNRWA in Syria have been forced to flee to surrounding countries and beyond. An estimated two out of every three Palestine refugees who have remained in Syria are internally displaced and almost all of the 450,000 remaining in Syria are reliant on the Agency for humanitarian assistance. This includes tens of thousands of Palestinians who are in besieged and hard to reach areas, such as Yarmouk or Khan Eshieh in Damascus or Muzeirib and Jillin in Dera’a, with constrained access to humanitarian assistance.

“The escalation of violence and deterioration of conditions inside Syria are rendering Palestine refugees in continuous need of humanitarian aid. UNRWA staff members are dedicating their lives on the front line to deliver crucial assistance to those in need,” said the Agency’s Deputy Commissioner-General, Sandra Mitchell. “We are very grateful for this generous contribution from the United States, which will help UNRWA to continue to provide a critical lifeline to Palestine refugees affected by the conflict in the region.”

Within the last five years, over 70 per cent of UNRWA schools in the country have been either damaged or destroyed. However, more than 45,000 students in Syria continue to have access to education in one of the 99 schools the Agency runs across the country. The UNRWA Education in Emergencies programme develops self-learning materials that have continued to allow children to access educational materials despite limited options for movement.

Besides UNRWA's work in Syria, the contribution will also go towards supporting the Agency's emergency response in Lebanon and Jordan. In Lebanon, it will help to ensure Palestine refugee children receive relief assistance, continued educational opportunities and access to health and social services, shelter and psychological support. In Jordan, the contribution will support the needs of more than 16,000 Palestine refugees who have fled the conflict in Syria, by providing them with cash assistance for essential needs and helping them to access health care and educational services.

The United States is the largest bilateral donor to UNRWA and has long been one of the Agency’s most reliable supporters. This latest commitment brings the total US contribution to the 2016 Syria Regional Crisis Emergency Appeal to nearly US$ 73 million.

In 2016, UNRWA is appealing for US$ 414 million to meet the minimum humanitarian needs of Palestine refugees affected by the ongoing conflict in Syria.