Home » Newsroom » Press Releases » United States pledges over US$ 123 million in support for UNRWA and funds new school in Ein Arik, West Bank
Back to Newsroom

United States pledges over US$ 123 million in support for UNRWA and funds new school in Ein Arik, West Bank 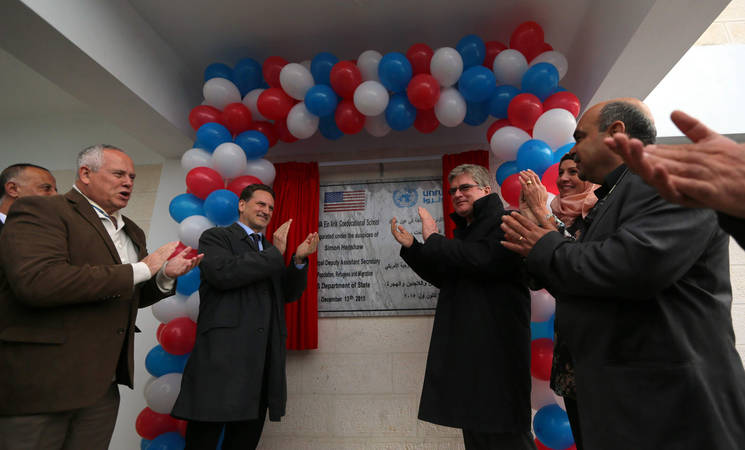 The United States Government pledged today more than US$ 123 million in support of Palestine refugees and the United Nations Relief and Works Agency (UNRWA) at a school inauguration event with UNRWA Commissioner-General Pierre Krähenbühl.  The United States continues to be the largest bilateral donor to UNRWA. Simon Henshaw , the Principal Deputy Assistant Secretary of the Bureau of Population, Refugees, and Migration, visited Jerusalem and the West Bank from 12-13 December to announce the US contribution and to underscore that the longstanding commitment of the United States to Palestine refugees remains strong and its dedication to UNRWA remains resolute.

The 13 December announcement of the US$ 123.4 million contribution is the first tranche of US support to help UNRWA cover its 2016 needs. Those funds mean that Palestinian children have textbooks and teachers; health centres have doctors; nurses and medicine; and those refugees who are most in need of assistance receive it.  This assistance benefits 5.2 million Palestine refugees, not only in the West Bank and Gaza, but across the region.  The United States provided more than US$ 380 million to UNRWA to help meet humanitarian needs in 2015, funds which kept 700 schools open and educated more than half a million Palestinian children.

This funding announcement came during the ceremony to inaugurate the new UNRWA school in Ein Arik, near Ramallah.  Nearly four years ago, UNRWA came to the United States government with an urgent problem. Some 200 students in the Ein Arik Co-Ed School had to be evacuated from their rented school building when nearby excavation work threatened the structural integrity of the building. UNRWA asked for US support to construct a new school that would give these students a truly excellent education.  The United States provided more than US$ 1.6 million for its construction.  The new school will help the students of Ein Arik village with their first steps to become leaders both at home and in the global community.  They will receive one of the best educations available in the Middle East as a result of the United States partnership with UNRWA.

UNRWA Commissioner-General Pierre Krähenbühl thanked the government and people of the United States: “We are very grateful for the generous contribution of the United States to fund UNRWA's regular programmes in 2016, as announced during the inauguration of the new school in Ein Arik, which was built with US support. The Agency’s education programme is essential for Palestinian refugee children to have improved prospects and hope for the future. UNRWA will continue to rely on the support of the international community to provide vital services such as education and health, emergency assistance, and better and more dignified livelihoods to Palestinian refugees across the Middle East."