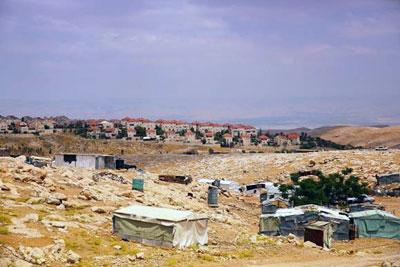 The first study of its kind about the transfer against their will of 150 Palestine refugee Bedouin families says that their situation has become socially and economically “non viable”. The joint UNRWA-Bimkom report analyses the consequences of the relocation which started in 1997 in order to expand the Ma’ale Adummim settlement, which, like all settlements is illegal under international law.

The study highlights the deterioration of the social and economic conditions of the Bedouin refugees transferred to Al Jabal village. The move to one central urban location has deprived these mobile pastoralist communities of social cohesion and is destroying their social fabric and traditional economic base.

According to UNRWA Spokesperson, Chris Gunness, “the Israeli authorities are currently considering plans to create a second centralised Bedouin village in the occupied West Bank”. “However”, says Gunness “the stark conclusions of this report may lead to a reassessment of this policy”.

The rural communities targeted to be transferred to the second village reject the move, stating it will irreparably damage their social fabric and their traditional economy, as in the case of Al Jabal. If implemented, such a move may amount to individual and mass forcible transfers and forced evictions contrary to international law.

Planning NGO, BIMKOM contends that the type of urban plans developed by the Israeli authorities for Al Jabal are not an appropriate solution: “The allocation of a small parcel for each family and the connection to minimal infrastructure can lead to significant harm to human rights. An appropriate plan should take into account socio-cultural aspects, provide subsistence and development opportunities, be developed with the villagers themselves and must be acceptable to them.”

Al Jabal village is next to the largest rubbish dump in the West Bank, where 700 tonnes of waste are disposed of each day. According to recent environmental studies, there are “high levels of toxic gases, which pose an immediate health threat to residents, but also cause internal and surface combustion at the dump site leading to explosions, land subsidence, surface fires and other safety hazards. High numbers of pests thriving off the site and its surroundings include rats, packs of dogs, cockroaches and flies, all of which pose significant health threats to livestock, the young and those of less robust health.

If the plan being considered by the Israeli authorities to relocate all remaining rural refugee Bedouin communities from the Jerusalem periphery to a second location - or other sites in the future - goes forward, the number of displaced people would be four times higher than the number relocated to Al Jabal. UNRWA remains concerned that more than six decades after they were first displaced from their homes, Palestine refugees continue to face the threat of displacement and loss of livelihood.

Financial support to UNRWA has not kept pace with an increased demand for services caused by growing numbers of registered refugees, expanding need, and deepening poverty. As a result, the Agency‘s General Fund (GF), supporting UNRWA’s core activities and 97 per cent reliant on voluntary contributions, has begun each year with a large projected deficit. Currently the deficit stands at US$ 66.9 million.