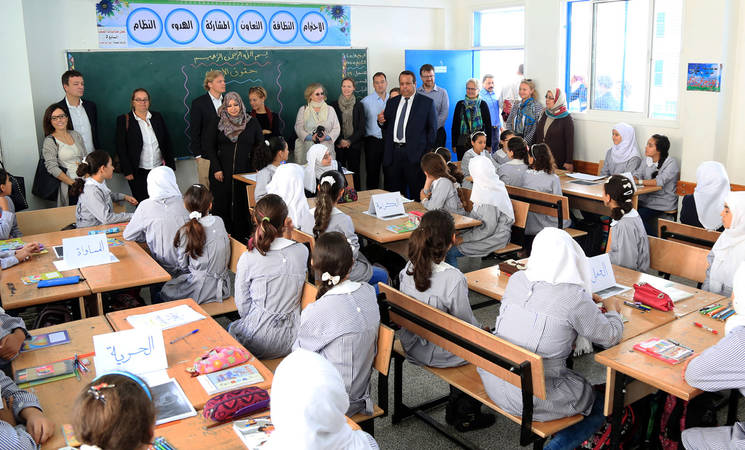 Resilience of Palestine Refugees Evident, Even as Coastal Enclave Remains at Risk of Being “Unliveable” by 2020

The United Nations Relief and Works Agency (UNRWA) conducted a field visit to the Gaza Strip on 18 and 19 November for 26 Advisory Commission (AdCom) members and other donor representatives. The delegation received an overview of the challenges currently facing Palestine refugee families in Gaza, now one year after the 2014 conflict. They also met with senior staff to discuss the role of UNRWA in a context of ‘de-development’ and cyclical conflict, as well as with local officials and civil society, including human rights organizations, regarding the impact of the Israeli blockade – now in its ninth year – and the future of Gaza as a liveable place until and beyond 2020.

The Agency’s most urgent funding need remains its emergency shelter programme. The delegation witnessed this acute ongoing need during a visit to Shujaiya, in eastern Gaza, one of the most impacted areas during last year’s conflict. While visiting a house under reconstruction, the AdCom members were briefed on the current successes and challenges for the UNRWA shelter programme and the Gaza Reconstruction Mechanism.

Senior UNRWA staff from the Agency’s education, health, relief and social services, microfinance, and infrastructure and camp improvement programmes, as well from the gender initiative, Gaza Gateway (the Agency’s IT social enterprise), and the Job Creation Programme, met with the delegation. The schedule included a visit to two UNRWA schools, Zaitoun Prep Girls B School and Nuseirat Prep Girls E School, as well as the Rimal Health Centre, the Tuffah Distribution Centre and the UNRWA Gaza Training Centre.

Accountability for the 2014 conflict in Gaza, including follow-up to the recommendations of the United Nations Independent Commission  of Inquiry, also featured in the AdCom field visit discussions, as well as the current socioeconomic situation in the coastal enclave.

To more broadly understand the current challenges facing Gaza, the delegation met with Gaza-based Ministers of the National Consensus Government and with representatives from civil society and human rights organizations. In 2012, a UN report warned that – unless urgent action was taken – Gaza risked becoming an unliveable place by 2020, with the degradation of Gaza’s water supply, energy provision being unable to cope with demand, and the public education and health system collapsing as a result of high population growth. These elements have been exacerbated by two conflicts since the report, as well as the ongoing blockade.

The AdCom field visit concluded earlier today and follows a two-day AdCom meeting held in Amman, Jordan, where the Director of UNRWA Operations for Gaza, Bo Schack, presented an update on Agency operations in Gaza and participated in a panel discussion on the sustainability of the situation in Gaza to 2020. A short film on the situation in Gaza was shared with AdCom members and can be viewed here.

“We welcome Advisory Commission members to Gaza to witness first-hand the situation following the 2014 conflict and in the context of an ongoing blockade and the UN’s 2020 report,” said Mr. Schack. “While the resilience of Palestine refugees in Gaza is evident, families need a reason to hope for positive change. They are relying on the international community, including our generous donors, to help address the warning signs the UN delivered in its 2012 report and to confront the root causes of the ‘de-development’ of Gaza by calling for a lifting of the blockade and real political will to change the status quo.”

UNRWA remains the only stable pillar for 1.3 million Palestine refugees in Gaza – pending a lasting and comprehensive political solution, Palestine refugees in Gaza will continue looking to UNRWA for their basic needs. By promoting human development and meeting their most pressing humanitarian needs, as well as the related contribution to the Gaza economy, UNRWA continues to be a stabilizing factor in an ever more volatile region.

The Advisory Commission was created by UN Resolution 302 (IV) on 8 December 1949. It is tasked with advising and assisting the Commissioner-General of UNRWA in carrying out the Agency’s mandate. Consisting of five members when it was first created, today the Advisory Commission (AdCom) is made up of 27 Members and 3 Observers. It meets twice a year, usually in June and November.