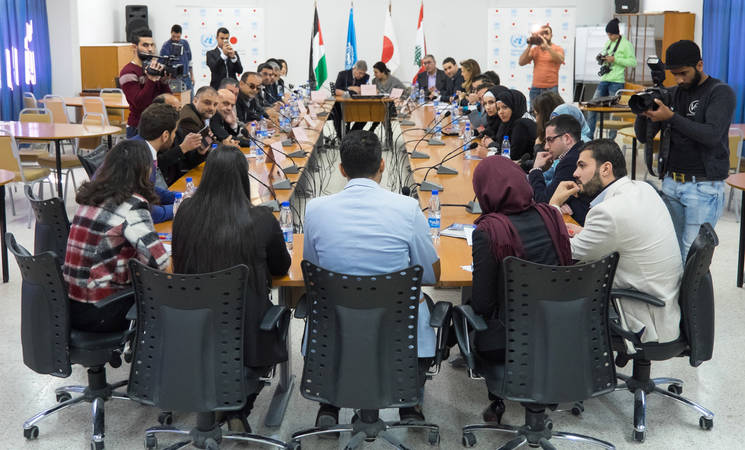 In the framework of the Japanese-funded projects for Palestine refugees in Lebanon, the United Nations Relief and Works Agency for Palestine Refugees in the Near East (UNRWA) held a ceremony at the Siblin Training Centre South Campus on 25 February to honour Palestinian scholarship graduates. During the ceremony, Palestine refugee students thanked His Excellency Seiichi Otsuka, Ambassador of Japan to Lebanon, for the significant Japanese contribution to the Scholarship Fund.

During the ceremony, a female Palestine refugee graduate from Beirut Arab University thanked the Government of Japan and UNRWA for giving her the opportunity  to go to university: “Our success is your success, for you have given us the freedom to dare, the courage to excel and the belief that we can achieve our best.  Today, I am more informed and certainly more equipped to tackle the future. I am certain that I have the right tools to obtain a better life and employment opportunities.”

His Excellency Seiichi Otsuka handed over graduation plaques to the graduates and in turn received a trophy of appreciation thanking the people of Japan for their dedication to Palestine refugees.

Following the ceremony, graduate scholarship recipients, representatives from the Palestinian and Lebanese business community, and Siblin Training Centre Debate Club members initiated a round-table discussion on ‘Bridging the Gap between Education and Employment’. During the discussion, business leaders emphasized the need for students to work on their soft skills, languages and interpersonal skills outside of their formal education and to gain direct experience though internships and apprenticeship programmes.

Thanks to the generous donation from the Japanese Government, 26 students have been able to pursue their higher academic education at universities in Lebanon since 2007, thereby significantly increasing their chances of finding employment and giving them hope for a better future.

Japan has continuously extended humanitarian assistance and provided long-standing, critical assistance to UNRWA to support the needs and improve the living conditions of Palestine refugees across the region since 1953. The Japanese government has traditionally been a major supporter of the UNRWA education programme. From 1989 to the present, the Government of Japan has awarded several scholarship projects for Palestine refugee youth in the region.

UNRWA continues its efforts to raise additional funds for the scholarship programme to provide opportunities for Palestine refugee students to pursue higher education.