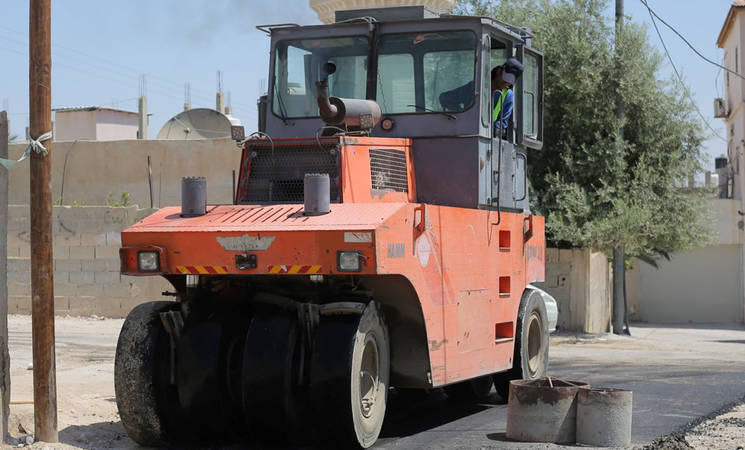 The United Nations Relief and Works Agency for Palestine Refugees in the Near East (UNRWA) and the Government of Japan celebrated the completion of the construction of a sewage network in Aqbat Jabr refugee camp in the West Bank.

In his speech during the closing ceremony, the Ambassador MAGOSHI emphasized, “This project will dramatically improve the circumstances of Aqbat Jabr refugee camp residents by contributing significantly to the infrastructure in the refugee camp; and wastewater management is an integral part of infrastructure in the effort to reduce threats to the public health of people and to safeguard the environment, especially, under the current COVID-19 crisis.”

Ambassador MAGOSHI added, “Through these efforts, we are contributing to improving the environment in the area and protecting precious natural resources. In this regard, we are also supporting the construction of a sewage network in Ein Sultan refugee camp in collaboration with UNRWA.”

In response, Director of UNRWA Operations in the West Bank, Gwyn Lewis thanked the Government of Japan for their continuous support to Palestine refugees: “Thanks to this generous contribution and by working together in phase I and II of this project, we have been able to connect 1,236 households to the Jericho sewage system. This represents a significant accomplishment and translates into real improvements in the daily lives of the Palestine refugees living in Aqbat Jabr.”

Thanking UNRWA and Japan, Jamal Awadat, head of Aqbat Jabr Camp Services Committee said: “The most important thing about this project is that it came right on time, as people have started making random cesspits, which started to negatively impact the incremental health in the camp and reduced the spaces the residents could have used had their houses been connected to the sewerage system. Thanks to the people and the Government of Japan for their support in all camps in the West Bank and to the Department of Refugee Affairs,” Mr. Awadat said and called to connect the remaining houses in the camp.

This generous grant, valued at US$ 6.2 million, has allowed for the construction of approximately 54 km of sewerage network in phase II, connected it to three main manholes of the Jericho sewerage system, and connected 748 households in Aqbat Jabr camp. In this second phase of this project, most of the camp is now connected to the main sewage lines.

The connection of most households to a functioning and sustainable sewage network system will ultimately improve their health, environment, quality of life and living conditions. Prior to the project, camp residents often used old and deteriorated cesspits, which led to the contamination of the ground water and posed risks for contaminated water-borne diseases. The construction of the sewage network therefore contributes to reducing environmental hazards and improving sanitary conditions for the 9,803 Palestine refugees living inside the camp.

UNRWA is confronted with an increased demand for services resulting from a growth in the number of registered Palestine refugees, the extent of their vulnerability and their deepening poverty. UNRWA is funded almost entirely by voluntary contributions and financial support has been outpaced by the growth in needs. As a result, the UNRWA programme budget, which supports the delivery of core essential services, operates with a large shortfall. UNRWA encourages all Member States to work collectively to exert all possible efforts to fully fund the Agency's programme budget. UNRWA emergency programmes and key projects, also operating with large shortfalls, are funded through separate funding portals.

UNRWA is a United Nations agency established by the General Assembly in 1949 with a mandate to provide humanitarian assistance and protection to registered Palestine refugees in the Agency's area of operations, namely the West Bank, including East Jerusalem, Gaza, Jordan, Lebanon and Syria, pending a just and lasting solution to their plight. Thousands of Palestine refugees who lost both their homes and livelihood because of the 1948 conflict have remained displaced and in need of significant support for over seventy years. UNRWA helps them achieve their full potential in human development through quality services it provides in education, health care, relief and social services, protection, camp infrastructure and improvement, microfinance and emergency assistance. UNRWA is funded almost entirely by voluntary contributions.