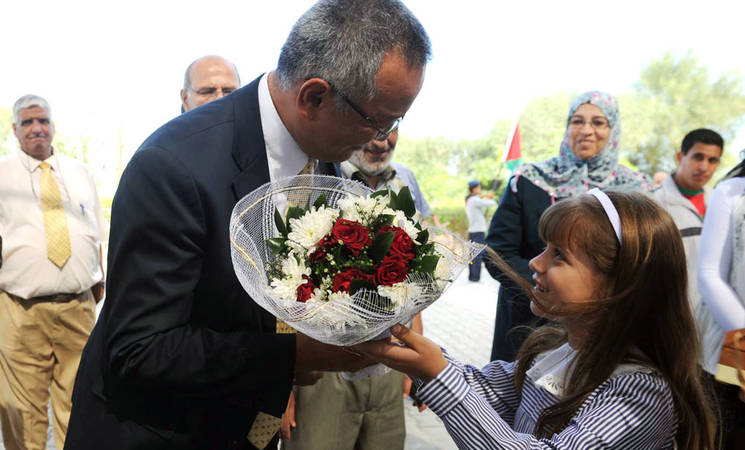 In Khan Younis, Makoto Honda, Deputy Representative of Japan to the Palestinian Authority, and Robert Turner, Director of Operations in Gaza for the United Nations Relief and Works Agency (UNRWA), inaugurated 226 new shelters, built for over 1,200 Palestine refugees whose homes were demolished or damaged beyond repair prior to the Israeli disengagement in August 2005.

The housing units were built through a donation of US$ 12.4 million from the Government of Japan, which also supported the construction, in Khan Younis, of two schools, a health centre and a community centre, as well as work on critical infrastructure systems including water, sewerage and electricity.

Mr Turner said: “We are grateful to the Government and the people of Japan for their commitment to the rehousing project in Gaza.” The project, originally initiated in 2006, was soon halted by the imposition of the blockade on the Gaza Strip. UNRWA is one of the few agencies granted limited exemptions from the Israeli restrictions on importing construction materials, but approval for the housing units was not granted until 2011. During the interval, displaced families were forced to rent sub-standard or unsafe housing, or seek shelter with relatives who were themselves frequently overcrowded.

Mr Turner continued: “Almost a decade ago, the families who will live in the Japan-funded houses lost everything overnight, in an extremely painful reminder of their first displacement in 1948. We are grateful to Japan for standing by us and the Palestine refugees until we were able to complete the new shelters.”

“I am happy to attend this wonderful occasion today to share with you this joyful moment”, said Mr Honda. “You have suffered a lot in the wake of your homes being demolished. It must have been one of the hardest times of your lives, and life has not been easy ever since. The people of Japan will be relieved if you now find yourselves happy in your new homes.”

Japan has been an important and reliable UNRWA partner for many years. Between 1953 and 2012, the Government of Japan contributed more than US$ 600 million in support of the Agency’s efforts to provide relief and assistance to Palestine refugees. Since 1973, Japan has been a member of the UNRWA Advisory Commission, providing advice and assistance to the Commissioner-General. From 12 to 14 September 2013, Commissioner-General Filippo Grandi will be visiting Japan, reflecting the importance of this relationship to UNRWA.