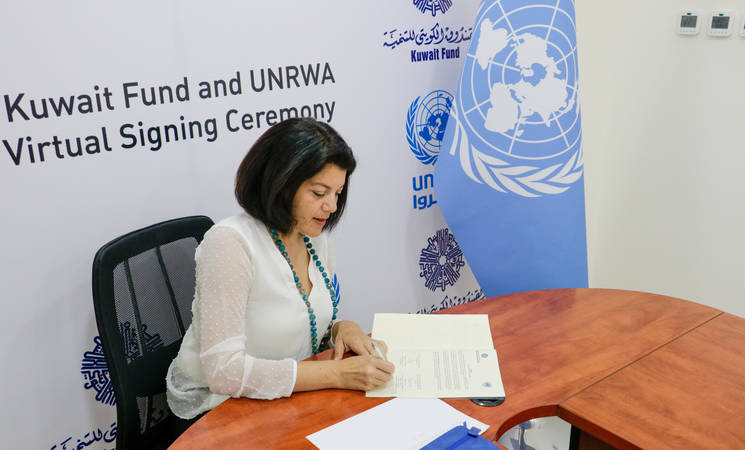 Today, the United Nations Relief and Works Agency for Palestine Refugees in the Near East (UNRWA) signed a memorandum of understanding that establishes a framework of cooperation with the Kuwait Fund For Arab Economic Development (Kuwait Fund).

The Agreement was signed between the Deputy Director-General of the Kuwait Fund, Mr. Marwan Al-Ghanem, and Ms. Tamara Alrifai, Acting Director of the UNRWA Department of External Relations and Director of Strategic Communications, during a virtual signing ceremony attended by representatives of the Kuwait Fund and UNRWA.

The new Agreement will establish a framework for cooperation between the lead UN agency responsible for Palestine refugees and the Kuwait Fund. Following the signature of the Agreement, Ms. Alrifai expressed her delight, stating: “This Agreement paves the way for a partnership that will help empower Palestine refugees and make them less dependent on humanitarian assistance. We very much look forward to working with the Kuwait Fund and learn from its experience to improve the lives of refugees in Syria, Lebanon, Jordan, Gaza and the West Bank, including East Jerusalem.”

Mr Al-Ghanem said, “Partnering with UNRWA is a crucial part of our objective to enhance the impact of our work in the lives of those who need help the most, and we are indeed delighted to collaborate with UNRWA in making a difference in the lives of Palestine refugees.” He continued, “This Agreement will establish a framework for the Kuwait Fund to provide support for the work of UNRWA in enhancing accessibility in the education, health and social sectors for the 5.7 million registered Palestine refugees in the region. The State of Kuwait has long been a reliable and consistent supporter to the Palestinian cause and particularly to UNRWA and its mission since 1950, providing over US$240 million in much needed financial support.”

The Kuwait Fund is a leading institution in the Middle East that takes an active role in international development efforts since 1961.