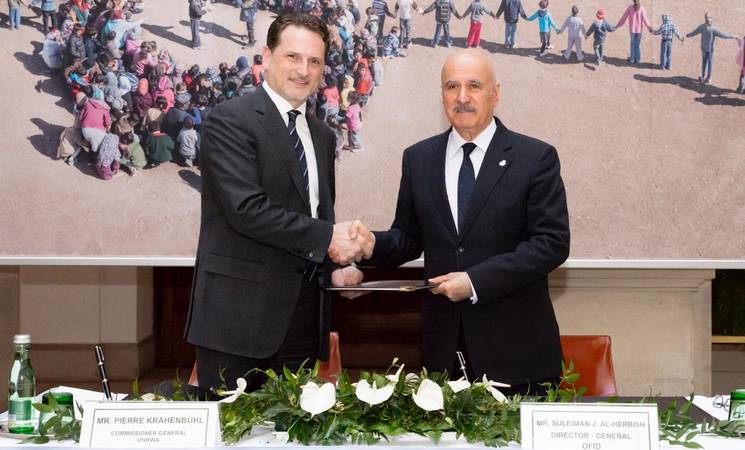 The OPEC Fund for International Development (OFID) has made a commitment of US$ 1.4 million to the United Nations Relief and Works Agency for Palestine Refugees in the Near East (UNRWA) to support the Agency’s camp infrastructure improvement project in Shu’fat refugee camp in East Jerusalem. UNRWA Commissioner-General Pierre Krähenbühl and OFID Director-General Suleiman J. Al-Herbish signed the contribution agreement on Tuesday, 26 April, during the opening ceremony for the ‘Child of Play’ exhibition hosted by OFID at their headquarters in Vienna to commemorate the fortieth anniversary of OFID this year.

“This generous contribution is deeply appreciated, as an act of solidarity and towards significantly improving the health, hygiene and dignity of the residents of Shu’fat camp,” said the Commissioner-General. “We are very grateful for OFID's consistent support over nearly four decades to UNRWA's mandate and its commitment to Palestine refugees.”

OFID Director-General Al-Herbish recalled witnessing firsthand Shu’fat camp’s dire need for infrastructure improvement during a visit there in 2014 to inaugurate the OFID-supported UNRWA schools project. “UNRWA is one of our closest partners working in Palestine, and we are confident that this new project will be yet another milestone in our exemplary partnership and cooperation,” he stated.

The project aims to enhance the health and living conditions of the residents in Shu’fat camp by upgrading the storm water and sewerage networks. The project will also contribute to better safety for the residents and improvement readiness for the rainfall season, which currently causes severe flooding and pollution. The project will begin on 1 June 2016 and is anticipated to be completed by 31 May 2018.

The opening ceremony of the Child of Play exhibition in Vienna was attended by Mr. Krähenbühl, as well as the UN High Commissioner for Refugees, former UNRWA Commissioner-General Filippo Grandi. The exhibition showcased a Child of Play initiative implemented at Zaatari refugee camp in Jordan and was held as part of the OFID ‘Equal Dreams’ campaign, which sheds light on the plight of refugees, especially on the impact of displacement on refugee children.