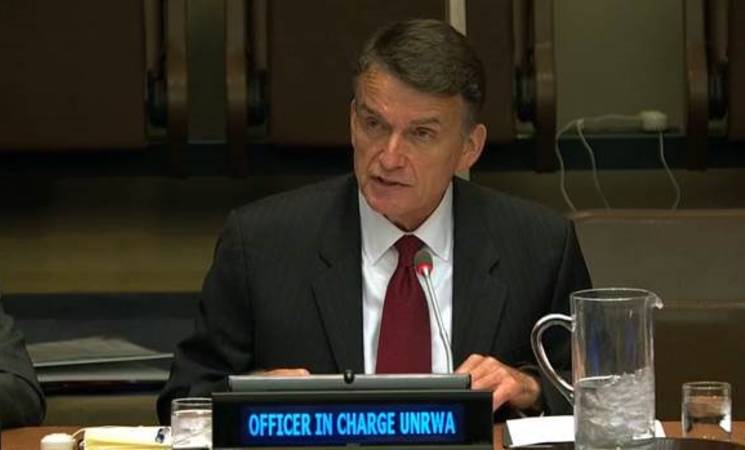 Yesterday, the Officer-in-Charge of the United Nations Relief and Works Agency for Palestine Refugees in the Near East (UNRWA), Mr. Christian Saunders presented the Agency’s annual report to the Special Political and Decolonization Committee (Fourth Committee) of the United Nations General Assembly in New York.

Addressing United Nations Member States present at the meeting, Mr. Saunders described the extraordinary circumstances in which UNRWA continues to operate, focusing on the financial and political challenges it faces, and presented the Agency’s outlook for the period ahead.

“UNRWA is a remarkably resilient agency that is undergoing the worst financial crisis in its history and requires the urgent attention and support of the international community,” said Mr. Saunders. “The Agency is in an extremely precarious situation right now and we are facing the possibility of reducing and indeed stopping the provision of services in the coming weeks, if the Agency does not receive additional funding,” he reiterated.

In his review of the latest developments, including in relation to the ongoing inquiry by the United Nations Office of Internal Oversight Services (OIOS) into UNRWA management-related matters, the Officer in Charge reassured donors and partners of measures that the Agency has already put in place to reinforce transparency and strengthen decision-making mechanisms. Further measures are being taken as part of a strategy to robustly address issues identified and use the momentum for broader reforms to further enhance the Agency’s ability to respond to the needs of Palestine refugees.

In presenting the report, Mr. Saunders highlighted the operational challenges and needs the Agency is facing across its areas of operation as detailed in the Agency’s annual report. This includes Gaza, where over one million people are dependent on UNRWA aid, Syria where after nearly nine years of devastating conflict and Lebanon, where Palestine refugees, including those who fled from Syria are particularly vulnerable. He emphasized the stabilizing role that UNRWA plays in a volatile region and appealed to Member States to ensure that the Agency’s mandate, which is up for renewal, proceeds smoothly. He called on Member States who are in a position to help with additional contributions to do so now and those that are yet to disburse funding pledged to the Agency to swiftly release the urgently required funds, noting extraordinary efforts by the Agency to address their concerns as a result of the ongoing OIOS inquiry.

“The Agency and its mandate are essential to reassure 5.5 million Palestine refugees of the international community’s commitment to their human rights and dignity,” said Mr. Saunders. “Frankly, under current circumstances, there is no alternative to UNRWA for the provision of these services. We are determined to continue delivering the highest quality, most cost-effective assistance required as long as the Agency’s mandate continues.”

The Agency’s Officer-in-Charge appealed to Member States to help UNRWA continue its vital services in health, education, protection and social services towards Palestine refugees in the West Bank, including East Jerusalem, Gaza, Syria, Lebanon and Jordan. He pledged to continue implementing the mandate of the General Assembly and ensure that Palestine refugees receive essential assistance pending a just and lasting solution to their plight. He called on partners to continue supporting UNRWA in this endeavor, including through the disbursement of funding necessary to close the current shortfall.