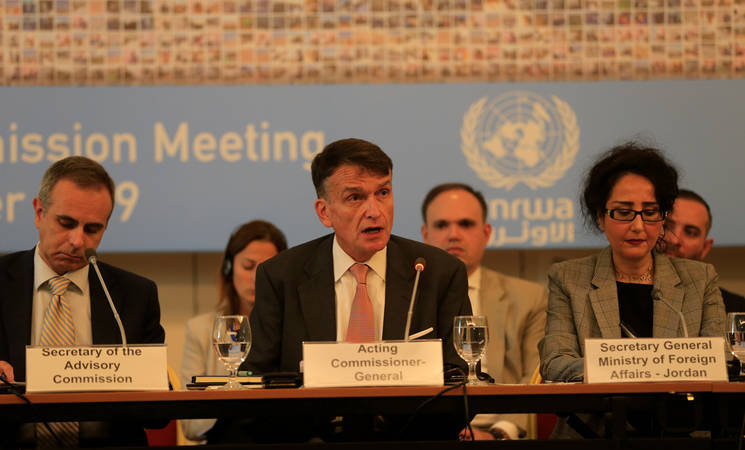 The Advisory Commission on the United Nations Relief and Works Agency for Palestine Refugees in the Near East (UNRWA) met in Jordan on 25-26 November where it held strategic discussions concerning the Agency and the challenges it faces in providing services to millions of Palestine refugees in the Gaza Strip and West Bank (including East Jerusalem), Jordan, Lebanon and Syria.

“UNRWA has just received overwhelming support at the Fourth Committee of United Nation’s General Assembly, but has also recently faced the most complex combination of challenges in its 70 years of existence,” said Acting Commissioner-General Christian Saunders. “We are working hard to overcome these challenges with the help of our donors and host countries, but we urgently need additional funding if we are to ensure uninterrupted provision of essential services to the more than 5.5 million Palestine refugees we serve.”

The Advisory Commission is tasked with advising and assisting the Commissioner-General of UNRWA in carrying out the Agency’s mandate. The two-day meeting also included a focus on new measures to strengthen organizational effectiveness along with increasing transparency, efficiency and accountability.

The Acting Commissioner-General reiterated his urgent call for all partners to continue their support to UNRWA, and pleaded with members of the Advisory Commission who were still withholding pledged funds to disburse them immediately. He also asked all members to increase their contributions to meet the most pressing needs of Palestine refugees.

“UNRWA needs at least US$ 167 million between now and the end of the year to be able to continue its programmes in education, health, relief, social services, camp improvement, micro-finance, protection and emergency assistance”.

“UNRWA is a remarkably resilient agency that is undergoing the worst financial crisis in its history and requires the urgent attention and support of the international community,” said Mr. Saunders, “The future of Palestine refugees is in your hands.”