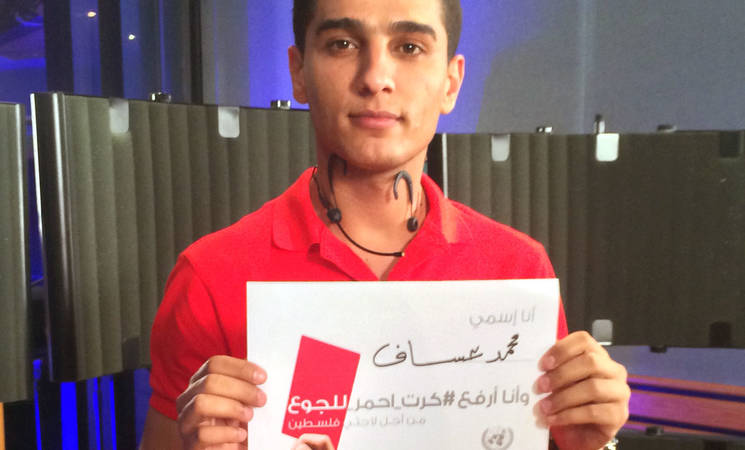 Mohammed Assaf - Arab Idol winner, Palestine refugee and Regional Youth Ambassador for the UN Relief and Works Agency for Palestine Refugees (UNRWA) has created World Cup history by creating the competition’s first ever ‘fan-written’ song. It was recorded in Dubai on 3 June.

Reflecting the World Cup spirit of hope, youthfulness and unity, the song was written, composed and recorded in one day. Starting on 25 May, fans and supporters around the world sent in their ideas and suggestions on Twitter and Facebook. During his live-streaming studio session, Assaf used their inspirational contributions as they came in from around the world.

Assaf will perform the song ‘Assaf360’, live for the first time on 10 June in São Paulo, Brazil, at the opening ceremony of the sixty-fourth FIFA Congress.

‘Assaf360’ will also be the anthem for the UNRWA Give for Food campaign. From the start of the World Cup until the end of Ramadan, UNRWA will be raising funds for food aid for some one million Palestine refugees who are unable to afford their basic minimum food requirements. All proceeds from the download of the song, via iTunes or Anghami+, will support the UNRWA campaign, helping “red card” hunger for food-insecure Palestine refugees.

The song is not Assaf’s only contribution to the Give for Food campaign. Until 17 June, supporters of the UNRWA campaign will be entered in a raffle to win World Cup prizes - five footballs and ten official jerseys - signed by our ambassador.