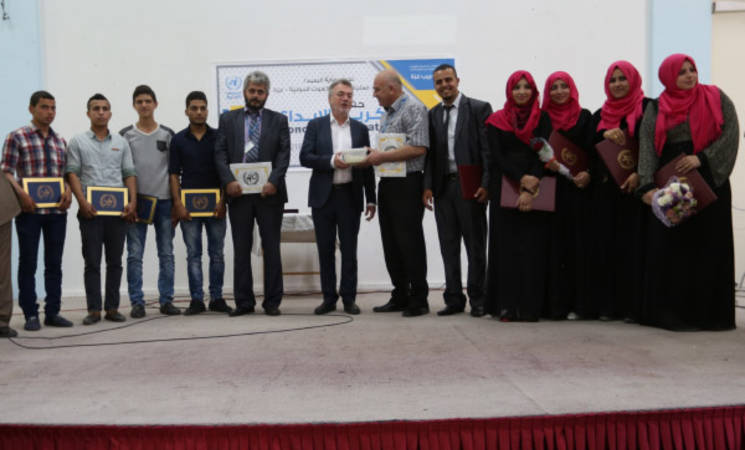 UNRWA celebrated the innovation demonstrated by graduates of its Gaza Training Centre (GTC) graduates. The ceremony was attended by the Director of UNRWA Operations in Gaza, Bo Schack, UNRWA senior staff, the students’ parents and representatives from the industrial sector, the General Palestinian Industrial Federation, unions and non-governmental organisations in Gaza.

The ceremony was held to honour two groups of GTC innovators and their supervisors. The first group consisted of four male graduates and their supervisors who were able to implement and develop a water solar heating system. The new sysrem attracted the attention of Action Against Hunger (ACF) and Mercy Corps, two international non-government organisations active in Gaza.

The second group consisted of five graduates (one male and four females) who were able to produce a cheese enriched with high percentage of calcium and phyto-oestrogen as a natural treatment for osteoporosis. The second group received a patent from the Palestinian Ministry of National Economy.

“It’s a proud moment to see such young innovators in Gaza despite all of the challenges and the obstacles that face youth in Gaza – they are an inspiration to future generations,” said Mr. Schack in his remarks.

UNRWA GTC was established in 1953. More than 21,000 students completed its vital Technical Vocational Education and Training (TVET) programme, which was introduced to assist youth refugees in finding employment opportunities to provid a decent living for themselves and their families and help in developing the local economy.

To enhance the effectiveness and efficiency of the TVET training and help graduates to finds jobs, the GTC maintains strong relationships with the unions in Gaza. Moreover, the unions are considered effective partners in upgrading the quality of training through sharing new training schemes and internships.