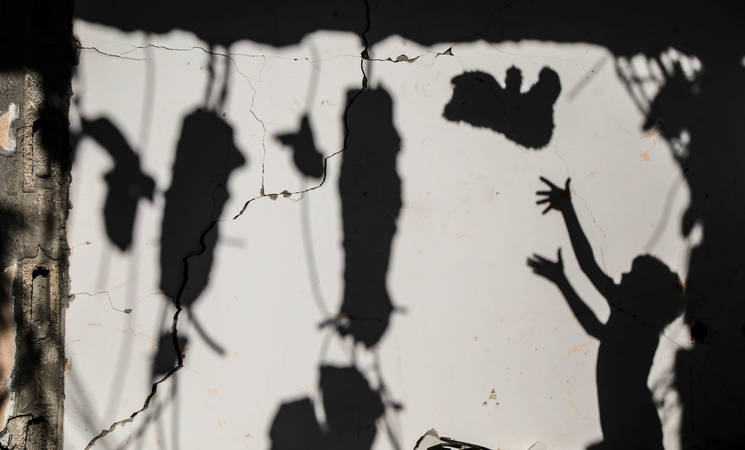 The UNRWA photo exhibition ‘We Deserve Life’ was officially opened at the Rashad Shawa Eastern Hall in Gaza City on 15 February, showcasing the winning submissions from the EU-funded 2015 UNRWA Photo Competition. All four winners from last year’s competition attended the event, which featured an awards ceremony in recognition of their winning photographs.

Each year, the EU-UNRWA Photo Competition offers Palestine refugees aged 16-29 an opportunity to capture their hopes and dreams in photos and share them with the rest of the world. The theme for the 2015 competition, ‘We Deserve Life’, sought to draw attention to the resilience and determination of young Palestine refugees despite the challenging circumstances in which they live, characterized by violence, forced migration, blockade and poverty.

The winning photo was taken by Hassan Hosni al-Jadi from Nuseirat refugee camp and shows Abraham, a young child from a family of five, playing amid the rubble of the building where he and his family live, which was bombed during the 2014 conflict.

The second-place winner was Mohamed Nabil Zarandah, whose photo depicts a young Palestinian child practicing gymnastics on rusted iron bars in his home in Jabalia refugee camp. The third-place photo, by Emad Samir Nassar, shows a father bathing his daughter and niece in a bathtub – the only remaining piece of their damaged home in Gaza. The people’s choice award went to Aaed Jamal Tayeh, whose photo shows a Palestinian girl posing in front of her family home in Beit Lahiya, in the northern Gaza Strip. A special honorary award was given by the EU Representative in Jerusalem to Nidal al-Waheidi for a photo that shows a child flying a kite amid the rubble of a destroyed building in Gaza. All four of the award winners were also from Gaza.

"For over four decades, the EU has supported Palestine refugees through our partnership with UNRWA, a partnership which has gone from strength to strength. The competition we are celebrating today is one more example of our joint efforts and our shared confidence in the talents of young Palestinians," said the EU Head of Cooperation, Alessandra Viezzer, who was in attendance at the event. "We will continue our support in the future. But our joint efforts are not enough to bring about the fundamental change that is so urgently needed in Gaza. That is why the European Union has repeatedly called for the lifting of restrictions on movement and access and for real progress in intra-Palestinian reconciliation leading to the return of a single Palestinian Authority to Gaza."

“We are very pleased to host this exhibition and awards ceremony to celebrate the inspiring talent of Palestine refugee youth from across the region, particularly the five winners, including the recipient of the people’s choice award, from Gaza,” said Bo Schack, the Director of UNRWA Operations in Gaza, who also attended the event. “The photos serve as a testament to their innovation, determination and courage, in spite of the harsh realities that surround them, and remind the rest of the world that they too deserve a life free from conflict and violence.”

The European Union is the largest multilateral provider of international assistance to Palestine refugees, providing crucial and reliable support to UNRWA since 1971. Between 2007 and 2014, the European Union contributed over EUR 1 billion in support of UNRWA, including EUR 809 million to the Programme Budget. In addition, the EU has generously contributed to UNRWA humanitarian emergency appeals and projects in response to various crises and specific needs across the region. EU Member States provide additional crucial support to the Agency. The partnership between the EU and UNRWA has allowed millions of Palestine refugees to be better educated, live healthier lives, access employment opportunities and improve their living conditions, thus contributing to the development of the entire region.