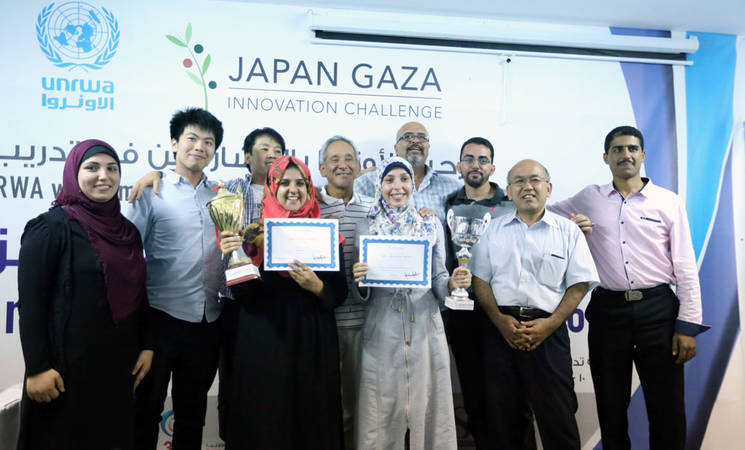 The workshop discussed how entrepreneurial ideas could contribute to a brighter future for Gaza in 2050 and provided an opportunity for the participants to have access to and network with Japanese investors and social entrepreneurs. A number of entrepreneurial incubators in Gaza supported the workshop with the UNRWA social enterprise spin-off GGateway, as lead organizer.

Two of the 10 competing teams were tied first place. The “Green Cake” project headed by Majd Almashharawi, a 22 year old civil engineer, was one of them. Majd’s environment-friendly project is on developing a new bricks-mixture by adding coal ashes, at a cost of 25 per cent less than the commonly used ones in Gaza. “This training was wonderful, we received new training ideas as well as skills on presenting our projects and innovations,” she said.

The other winning team, “Sketch Engineering,” headed by Amal Abu Mouailiq, presented a solution for carrying heavy weights on stairs: a three-wheel stair climber, which can also be used for persons with motor disabilities. “The other four contesting teams (who made it the final round) were very competitive and we really didn’t expect to win,” Amal said. Both teams were rewarded a financial prize of US$ 5,000, along with technical support to start their business.

Professor Seiichiro Yonekura, one of the judges from the Japan Gaza Innovation Challenge, said: “We are proud of these five teams, we were motivated by their ideas, and we are happy to provide assistance and invest in their ideas.”

Through different interventions, UNRWA encourages and supports young entrepreneurs in Gaza as a means to overcome the hardships created by the dire socio-economic context in the small coastal enclave. The blockade on Gaza, which entered its tenth year in June 2016, along with repeated cycles of armed conflict have crippled the enclave’s economy and pushed a large part of the population into unemployment and poverty. In 2015, the overall youth unemployment rate stood at 61 percent, while female youth unemployment stood at 78.5 percent, according to the Palestinian Central Bureau of Statistics.